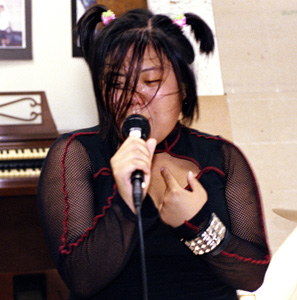 A lot of Riot Grrl nostalgia is woven into Girls Rock!, the all-female equivalent of Rock School. At a five-day camp in Portland, Ore., where counselors include Carrie Brownstein and Beth Ditto, 8 to 18-year old girls are divided up into bands, (somewhat) learning new instruments, writing songs and performing in an all-camp showcase.

As expected, Girls Rock! shapes its own subplots by focusing on a select few – for one, there’s Laura, the adopted Korean teenager who loves death metal and confesses to low self-esteem. It is Laura who brings an awkward moment of truth to the film, the dilemma in wanting to be a feminist without compromising femininity, noting that being in a band is “cooler than having a boyfriend in a band ... I think.”

Perhaps the most interesting character in the story is Palace, a fashion-conscious seven-year old who leads the Vibes. Already angst-ridden, Palace growls a few lines rather advanced for someone her age, showing distaste for her mother’s fashion industry trips to San Francisco.

Not only are these girls taught that Kathleen Hanna’s a superior role model to anyone found on MTV, but the style of the doc itself is largely in the vein of ’90s reality entertainment. But in watching the girls take supplementary courses in self-defense and speaking up, it becomes increasingly apparent that while many girls are still afraid of power, there’s a lot of inspiration to draw from girls who do know how to use what they’ve got. And girls rock.