Kirsten Dunst: An Old Soul in a Young Body 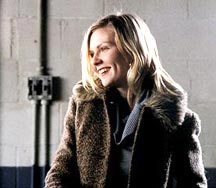 Kirsten Dunst is just like one of us. She wears casual blue jeans and a peasant shirt from the Bloomingdale’s sale rack. She fidgets and says "like" a lot. She went to Notre Dame High School in the Valley. She may be more beautiful than the girl next door with her clear, striking blue eyes, but she could be any lucky one of us.

Dunst’s impressive resume includes a list of over 40 movies, television shows and commercials that she has been a part of since her start in stardom at age three. Now 19, she started with Ford Modeling Agency debuted on screen in playing Mia Farrow’s daughter in Woody Allen’s 1989, New York Stories, But perhaps she’s best known for her romantic kiss with Brad Pitt in Interview with the Vampire–at the tender age of 12. A pre-pubescent acting career that could have left her with a space on The Surreal Life has resulted in a grounded filmography, including blockbusters and ensembles indie-flicks.

"You have to take risks," Dunst says, "cause that’s when, like, the real gems happen."

Much like the risk she took in The Virgin Suicides with first-time director Sophia Coppola, Dunst again chances an ensemble role in Levity. Opening April 4th in theaters, the film is Ed Soloman’s story of a reformed murder convict who’s released after 23 years in prison. Depressing yet powerful, this character sketch of Manual Jordan, played by stoic-great Billy Bob Thorton, returns Jordan to the same society he wronged. He seeks forgiveness and redemption from those he harmed while similarly trying to teach the next generation what he learned from him crime.

And that is where we find Kirsten Dunst playing Sophie Mellinger, a young suburban party chick who falls victim to intoxicating evils and often finds herself blacked out in cars with random men. Sophie crosses paths with Manual Jordan (a.k.a. "God Boy," as she refers to him) cross paths in the parking lot of the nightclub she frequents and he hesitantly helps Sophie keep herself together.

Sophie and Manual are "really trying to find the light" in their relationship, said Dunst. "I want to breakthrough to him and for him to break through to me." And there is a breakthrough, if a somewhat anti-climatic one: Jordan finds some sort of humor, if only to laugh at himself, and Sophie becomes involved in community activities rather that self-deprecating drunkenness. Although she’s a new character, Sophie echoes a theme Dunst consistently portrays on camera, that of a young body with a wise soul.

Levity’s title may be somewhat ironic, but working with films greats Billy Bob Thorton, Morgan Freeman and Holly Hunter was not enough to change the somber mood on the winter set in Montreal, Canada. "As soon as you are in cold weather, shooting nights…you don’t have the comforts of home," said Dunst. "I was by myself, and it gets lonely."

But the sun will soon be shining on a much warmer Dunst when she starts shooting the Spiderman sequel with Tobey Maguire on April 12. She is also working on another supporting role in Eternal Sunshine of the Spotless Mind written by "brilliant," as she says, Charlie Kaufman, as well as Mona Lisa Smile with Julia Roberts and Julia Stiles. And of course, there is the return to sunny Los Angeles to her Good Girl boyfriend, Jake Gyllenhall who she simply refers to as "mine."

So, will the girl next door who likes to veg out at home, play with her cats, and watch movies be the girl in the dorm room across the hall next year? Not likely. "I don’t want to go to college. I am doing what I love to do," she says. And as Kirsten Dunst extends her range of characters, choosing roles that cast her beside Oscar winners and Hollywood legends, she might already be learning the valuable lessons of higher education–the Hollywood version.