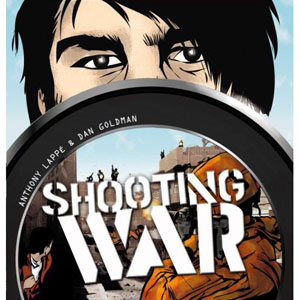 Set in the near future where the war in Iraq still rages, Shooting War, by Anthony Lappé and Dan Goldman, is a satire on the media and its place in the conflict. It follows anti-corporate blogger and guerilla journalist Jimmy Burns—a kind of populist folk hero for the 21st century—who is co-opted by the Global News Network and embedded in Iraq.

Lappé, a journalist who spent time covering the war in an award-winning Showtime documentary, puts the reader in the middle of the conflict better than any of the recent serious films that have come out of Hollywood. The irreverent writing style suits the absurdity and senselessness of the war.

The artwork by Goldman accompanies the subject matter and original medium of the work by blending actual images from the war torn region along with the comic art.

Shooting War is a close look at the gigantic mess the Middle East is in and the media’s part in it.