Under the Table: A Beginner's Guide to Drinking Games 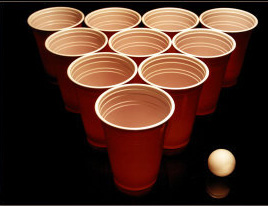 With Saint Patrick’s Day right around the corner, it’s time to celebrate the holiday properly … by getting drunk off your ass. Whether you’re having a round at the pub or just drinking at home with some friends, wearing green and drinking yourself (and others) under the table is what the 17th of March is all about.

As for the actual drinking, sure, you can take shots, but where’s the fun in that? Why not play a drinking game or two for some good laughs and fast buzzes? Here are some great drinking games to play with your friends come Saint Patty’s Day:

King’s Cup. Ahh, the classic. All you need is a group of people, each with a drink in hand, an empty cup and a deck of cards. Place the cards face down in a continuous circle around the empty cup and then sit around it.

Each card equates to a command, and the rules always seem to differ for this game. Just look up the rules online before you play (or make up your own).

The one rule that’s always the same, though, is the rule with the kings (hence King’s Cup). The first three people to draw a king pour some of their drink into the cup in the middle and the unlucky person to draw the last king has to drink it. The greater variety of drinks, the better their reaction.

Beer Pong. Another classic, and it’s always popular at Frat parties. There are various ways to play it, but the basic method is arranging 12 cups (each with 1/3 cup of alcohol) into two pyramids and then trying to throw a ping pong ball into one of the opponent’s cups.

Again, there are various ways to play, and you’re not limited to just beer (though beer’s way cheaper than mixed drinks), so look online or be creative in order to maximize the fun (and drunkenness) you and your friends will experience.

Rock-Paper-Scissors. Really, you can make a drinking game out of anything. You can play rock-paper-scissors and take a shot/sip every time you lose.

You can also play with directions, where the rock-paper-scissors winner points either up, down, left or right and the loser turns their head in a direction. If the loser faces the same direction as the winner, then he or she takes double the amount.

You can also get creative and make up your own game! Whatever you do for

Saint Patrick’s Day just make sure you have (somewhat responsible) fun with your friends.