All Aboard the Rocky Mountaineer: Traverse Western Canada By Train 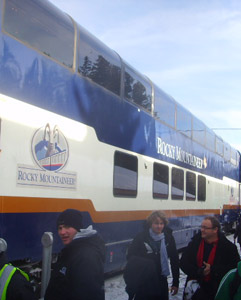 In early November 1885, all of Canada rejoiced as the news spread: the railroad was finished! The last spike had been driven near Craigellachie, British Columbia, and that meant that the country could be traversed by rail from ocean to ocean. The hard-working men who built the railroad would no doubt shake their heads in disbelief if they could see the Rocky Mountaineer whizzing by that exact spot today with cars full of pampered passengers.

The train ride through the Canadian Rockies is one of the most spectacular journeys in North America, and you can enjoy trips of varying lengths on the Rocky Mountaineer as it plies routes through British Columbia and Alberta. One of the most popular runs is a two-day trip from Vancouver, B.C. to Banff, Alberta with an overnight stop in Kamloops.

The company does everything they can to make your trip a carefree one, starting with the handling of your luggage. Lodging in Kamloops is included in the price of the train ride, and you’ll find your suitcases waiting for you in your room upon your arrival, so all you have to do is settle into your cushy seat and watch the world glide by.

The train pulls out of Vancouver just as the city is waking, making its way across the Fraser River Bridge and then following the river east. This is the time to be on the lookout for wildlife, especially of the flying variety.

The treetops along the river are often filled with bald eagles; it’s not an exaggeration to say that there are hundreds of the magnificent birds perched here while others swoop and soar across the water. Other birds to spot in the area include golden eagles, snow geese, swans and if you’re really lucky, osprey.

All of the cars have large windows that make for easy viewing of the scenery. and if you travel in one of the Rocky Mountaineer’s double-decker dome cars, you can even watch those eagles flying directly above you. The dome cars are part of the Rocky Mountaineer’s Gold Leaf service, and while your seat is upstairs, the downstairs portion of the car is home to the dining room.

Here you get to sit down for breakfast and lunch everyday, ordering from a menu that features foods that are popular locally. If you’ve ever eaten bison, you know that it’s just as tender as beef, and the medallions served on the lunch plate are soft and flavorful.

Every entrée comes with all the trimmings, including dessert and wine. There are big windows in the dining area so you won’t miss a thing while you eat.

When you get back to your seat, your car’s attendants will keep you watered nicely; soft drinks, beer, wine, cocktails and snacks are included in the service. The attendants also offer a wealth of information about the scenery you’re passing; they’ll point out places with colorful names like Jackass Mountain and Jaws of Death Gorge, and let you know which side of the train the upcoming scenery will be on. You’ll travel about 285 miles the first day, arriving in Kamloops in time for a scrumptious buffet dinner and show that may feature a lumberjack competition or an old-time music review.

Leaving early in the morning, the train pulls out of Kamloops headed for the rugged Rocky Mountains and the disembarkation point in Banff. This leg of the journey has the train passing through some amazing “spiral” tunnels, passing the last spike marker and crossing the continental divide.

If you travel in winter you may want to bring your skis or snowboard and play in Banff for a couple of days; otherwise, you can ride the train back to Vancouver (additional cost) or catch a shuttle bus to Calgary and fly home from there. This journey is one of many that Rocky Mountaineer Vacations offers.