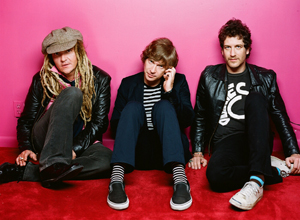 Nada Surf might just be one of the luckiest bands around. In spite of being voted “Band Least Likely to Succeed” in years past, five albums later, they have returned once again.

Their new, aptly titled album, Lucky, wields a mighty batch of some of the best indie rock tunes ever crafted. Experiencing a meteoric rise to alt-rock fame during the ’90s with the cult hit “Popular,” the band was snatched up by Elektra Records – only to be dumped from their roster immediately thereafter.

Others might have licked their wounds and crawled into the corner of untimely demise, but not Nada Surf. Emerging triumphant time and time again with the support of indie label Barsuk, the trio continually proves it is a force to be reckoned with.

Lucky, at times both bittersweet and uplifting, is laden with strong melodies carried by Matthew Caws’ emotionally rich vocals and deceptively subtle instrumentations. Armed with a series of demos forged in bass player Daniel Lorca’s Williamsburg, Brooklyn apartment, the band ended up recording in Seattle, commuting from New York to work with producer John Goodmanson (famed for his work with Death Cab for Cutie and Blonde Redhead).

Drummer Ira Elliot describes the overall sessions as “chill” and a “good creative atmosphere,” but recalls a grueling process.

“A lot of time in the studio was trying to glue part A onto part B and then flip it over and see how it looks backwards,” he remembers. “There’s a lot of ‘Tetris’ playing with songs, how you can get from one part back to the other, which is the most frustrating part of making a record. Once it’s all done, it seems very logical and that it was all meant to be that way; but getting there can be a major hassle.”

Welcoming a string of guest artists such as Ben Gibbard from Death Cab and Harvey Danger’s Sean Nelson was just part of the fun.

“A lot of those guys lived in the neighborhood, so we knew that they were going to come by,” explains Elliot.

Nada Surf has had a good run at perfecting their dynamic around a core of three, which is remarkable. To maintain a lineup this consistent for 12 straight years is rare.

“I think that has to do with the chemistry,” Elliot says emphatically. “You know when you play together and everything simply falls into place. It’s kind of an indescribable thing, unless you’ve experienced it within the context of a band. And that’s the way it was when we started playing together. It was kind of a Eureka moment.”

He also owes it to good communication skills.

“Guys, they play their instruments, but they have no idea how [to communicate]. Look at that Metallica documentary. These guys played in a band together dozens of years, and they can’t even talk to each other. They’re still like 15-year olds.

“We just like each other,” he continues. “And we know a good thing when we got it. It’d be crazy for us to pick fights with each other and ruin such a great thing.”

Perhaps one of the most interesting traits Nada Surf possess is their complete lack of gimmickry, focusing instead on the strength of their songs.

As Elliot sees it, “The whole idea of Nada Surf was kind of like blank slate. We don’t really want to put ourselves in a box. And we’re not really comfortable with selling ourselves. We sell the music.

“But I think we enjoy this kind of weird, underdog status. We’re highly unlikely. I think that’s the beauty of Nada Surf,” he muses. “It all seems so impossible. You know, the band from the ’90s had this really big hit, then, ‘OK you’ve had your five minutes now, please go away.’ Then we come back with a record that people really like and we thrive. And that story in and of itself is really good. We’re really happy with that arc. We couldn’t be happier, actually.”