The Hands: The Hands
(Selector Sound) 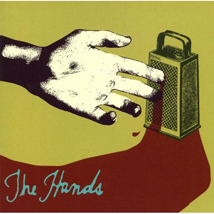 With heavy approval from Brian Foss, owner of garage rock-friendly Seattle venue the Funhouse and host of KEXP’s Sonic Reducer, arguably the best punk radio show on the West Coast, the Hands appear a sure bet. The Olympia group is a quintet of bluesy garage and southern-style punk – dirty rock ’n’ roll as it’s meant. But there doesn’t seem to be a lot of authenticity in this full-length debut, recorded last fall.

One should expect that they’re a thrilling live band, a group that sounds better with every forced drink. But on record, their lead guitar and production are too clean to pull off a sound of spontaneity; there’s adequate variety in the pacing of their songs, but as a complete package the Hands resemble a nameless member of 2002’s supposed garage rock craze.

Harmonies are a bit on the sloppy side, but sloppiness would be better left to the guitars, which could stand a bit of distortion to mimic the noisy static of speakers in a live setting, where the Hands likely thrive.

There’s a quality guitar solo on “Lord's Gonna Trouble,” a decent vocal imitation of Mick Jagger by John Healy (particularly on “Nothing”) and a chord combination which almost adds up to “House of the Rising Sun” (“Wade in the Water”). But outside of a few exciting moments here or there, the record’s not raw enough to be praised as a raw record, and though it’s admirable to rock in a region dominated by soft-spoken indie poppers, this effort isn’t enough to get the Hands beyond the Funhouse.

The Hands is currently available.