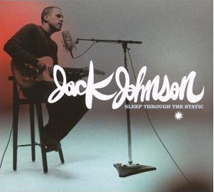 Jack Johnson has a gift for sun-drenched, laidback melodies. Somebody should tell him that.

Johnson’s songs typically fall into three categories: the feel-good, offbeat-hitting sing-alongs, the love ballad lullabies and the first person plural Serious Statement songs. The third are always the weakest points in his albums. His latest finds him regrettably indulging in his Serious impulses and, as a result, is laden with mid-tempo snoozers.

You can’t fault Johnson for wanting to grow as an artist and songwriter, but knowing what you’re good at isn’t a bad thing either. Part of what separates a good album from a random collection of songs is balance.

This album might as well be called The Lullabies of Jack Johnson. It’s one of the more somnolent albums in recent memory.

I like Jack Johnson when he’s being Jack Johnson, and not trying to be some doleful version of young Bob Dylan. There’s so much low-energy, pensive music nowadays, it’s refreshing to be able to mix it up and throw on a Jack Johnson CD.

Sometimes reminding people that it’s OK to feel good now and again can be just as important as making Big Statements. I just hope Johnson can find a more consistent voice as he continues to develop his talent.

Sleep Through the Static is currently available.