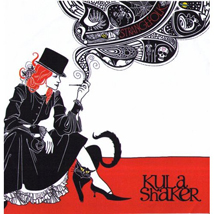 These eclectic British rockers haven’t put out an album for eight years, but Strange Folk proves to be well worth the wait. The band has always had a bent towards mysticism both lyrically and musically, and the exploration of the unknown is represented here with songs like “Shadow Land” and “Second Sight.”

Of course, a big portion of the unknown revolves around the mystery of death, and that subject is dealt with in different ways on “Out on the Highway” and the title cut. Singer Crispian Mills, son of Hayley Mills, often teams with two of his band mates to layer on lush vocal harmonies; the soaring voices adding to the already otherworldly aura radiated by the music.

If you were to mash up the psychedelia of Syd Barrett-led Pink Floyd with the pop-oriented rock of the Hollies and evolve that sound to the present day, you’d have a pretty good approximation of what Kula Shaker sounds like. Mills does take the band out of the magic forest once in a while, though, notably for “6Ft Down Blues” and the political commentary of “Great Dictator (of the Free World).”