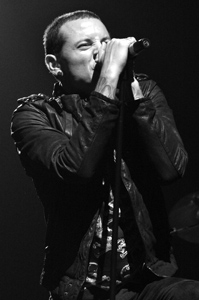 A surprisingly sophisticated and mature Linkin Park played to a sold out Staples Center audience who was itching to take a whirl through the pit. Unfortunately for the crowd of thousands, not until the end of the set would they hear the rap-metal songs they so anxiously anticipated moshing to.

Although the unparalleled enthusiasm that came with “One Step Closer” during the second encore was well worth the wait, an abundance of slower, more mellow songs from Minutes to Midnight were what actually filled the set. Understated and sorrowful performances of “In Pieces” and “In Between” had vocalists Chester Bennington and Mike Shinoda emoting a gritty angst, but without their typically energetic stage presences.

Officially designated as the hold-up-your-lighter moment of the night, “Shadow of the Day” staged large mobile light fixtures that imitated a setting sun. Though heavier numbers like “Breaking the Habit” and “Bleed it Out” still made appearances, the night actually belonged to the ballad.

Linkin Park’s reputation for putting on furious shows preceded them, with the venue absurdly over-staffing security. Dozens of guards prepared for the worst, but frankly, were left without much to do all night.