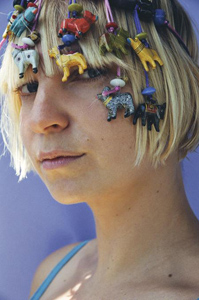 It’s time for another release in the Punk Goes… series from Fearless Records, and this time out a roster of popular “punk” groups try their hand at hip-hop. This makes for some really unique match-ups – did you ever think you’d hear Scary Kids Scaring Kids covering Notorious B.I.G. (“Notorious Thugs”) or Hot Rod Circuit taking on Snoop Dogg’s “Gin and Juice?”

Punk Goes Crunk offers those delights and many others: the Escape Frame reworks Dr. Dre, the Secret Handshake re-imagine Skee-Lo and All Time Low cover, ahem, “Umbrella” by Rihanna. Some very interesting ideas going on here, but as the Devil Wears Prada might say about their homage to Big Tymers, things end up “Still Fly.”

Guitarist Marcos Curiel has re-joined P.O.D., and the band has signed a deal to release a new record through INO/Columbia. When Angels and Serpents Dance drops April 8, and the group couldn’t be more excited about the reunion.

“This band is a supernatural experience to me,” says Curiel. “It has literally surpassed many of my vivid dreams.”

Singer Sonny Sandoval is equally enthused: “After four years Marcos is back in the band, and we’ve got new music. Things are exciting again!”

Paige Hamilton of Helmet, Mike Muir of Suicidal Tendencies and the Marley sisters appear as guests, and the song “End of the World” features a gospel choir. Sandoval admits that the sound of the band, while still savage, has expanded.

“Age has a lot to do with it. I’m married with kids now and we’re not 18 in the garage anymore playing hardcore punk. We don’t sound like those guys down in the garage.”

The title track from When Angels and Serpents Dance is currently available for free download at www.payableondeath.com.

The Bravery Shoot the Moon

The Bravery has re-imagined their album The Sun and are about to re-release it as The Sun and the Moon Complete. The new package is a two-CD set with disc one being the original The Sun album, while disc two is the new version, The Moon.

The Moon version of “Believe” has been released as a single after the original take garnered attention on TV shows “The Hills,” “Friday Night Lights,” “Grey’s Anatomy” and “Gossip Girl.” The ubiquitous tune is also used in a few new video games: “Madden ’08,” “Madden NFL” and “Game with Fame” as well as in commercials for Pontiac and the Gap.

No wonder the band is over the moon. The Sun and the Moon Complete drops March 18. www.thebravery.com

KCRW has announced the first show in a series of three benefit concerts to be held at the Malibu Performing Arts Center. The April 24 event will feature a full-band performance from Zero 7 singer Sia.

Sia is touring in support of her critically acclaimed fourth solo album, Some People Have Real Problems, and KCRW Music Director Nic Harcourt is revved about having the eclectic artist open up the benefit series.

“Sia is a unique, funny and creative personality. It’s sure to be entertaining, that’s a fact.”

The Malibu Performing Arts Center is a state of the art facility and no stranger to hosting benefits; they recently put on shows to help out victims of the October wildfires. Proceeds from the Sia show go to the music programming department at KCRW.

Tickets start at $75 with a special $150 ticket also including access to a pre-concert party. Tickets go on sale March 20.