Early Marriage Survives in the U.S. 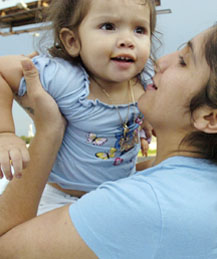 In its most forgiving outline, the love story of Liset and James Landeros has the ring of a fairy tale.

Liset and James fell in love. They defied their parents – and the law – to follow their hearts. And after many struggles and trials, they finally married.

But one harsh detail – their ages – belies this romantic formula. A slight, quiet girl with coffee-colored eyes, Liset was only 12 when she began dating James, four years her senior. At 13 she was pregnant and miscarried her first baby. At age 14 she married James to keep him out of jail; the state of Texas was threatening to charge him with the statutory rape of a minor.

"Everybody wanted to separate us, but we didn’t let them," Liset says with girlish pride. "Being married young isn’t easy. But we’re trying."

Trying, in the young Landeros’ case, means that James, now a 21-year-old father without a high school diploma, pulls double shifts managing a cafeteria to help pay the couple’s household bills. And Liset, a 9th-grade dropout and the mother of a rambunctious 2-year-old daughter, works six days a week as a waitress at a Mexican restaurant. An awkward 17-year-old, she looks even younger than her years as she shyly takes down orders. Her boss calls her "baby girl."

Mention the words "child bride," and what generally springs to mind are the millions of girls bullied into arranged marriages in the dusty villages of Africa or Asia – not jeans-clad American kids such as Liset Landeros.

But even though early marriage is an issue overwhelmingly associated with the developing world – barely 2 percent of all American pregnancies, for instance, involve married girls under 18, government statistics show – the antique practice still survives in the United States. And it often sentences young American women to a lifetime of poverty and other problems. While they don’t face the severe pregnancy-related injuries of young girls in the developing world, they risk increased rates of chronic anemia and obesity.

America’s child brides tend to be older than their foreign sisters: Marriage records show they are usually in their mid- to late teens, not the preteens of Afghanistan or Bangladesh. And many American girls, exercising an enviable degree of choice, tend to marry out of love, not because they were railroaded into wedlock by tribal traditions or religion.

But the most unexpected difference of all involves the changing popularity of the practice at home and abroad. Even as humanitarian groups have begun slowly working to eliminate child marriage overseas, arguing successfully that it violates the basic human rights of girls, surprising numbers of youngsters in the United States are edging closer toward the altar.

One of the few studies of teen marriage in the United States, carried out by the Center for Law and Social Policy, a Washington think tank, found that the number of married teenagers in the United States surged by almost 50 percent during the 1990s – the most significant jump in early marriage since the 1950s.

The report pegs the growing attractiveness of early wedlock in the United States to a complex variety of factors: the spread of abstinence-only-until-marriage sex education at American schools, a shift toward cultural conservatism among some teens and a growing fear among youngsters of contracting AIDS through promiscuity.

Such data are questioned by some experts, who note that marriage records in the United States are patchy at best.

But a recent national opinion poll shows that 84 percent of American teenagers believe strongly in marriage before childbirth, suggesting the trend may be real.

Perhaps only 150,000 of the more than 800,000 teenage pregnancies that occur in the United States every year involve married girls, research shows.

"This is really unexplored territory in the States because most of us are still focused on the more typical case of unwed mothers," says Andrea Kane, an analyst at the National Campaign to Prevent Teen Pregnancy, which conducted the teen opinion survey.

Kane adds that extremely young U.S. brides face their own problems: They tend to drop out of school at even higher rates than single mothers; their marriages usually don’t last; and they face an increased risk of domestic violence compared to women who marry at an older age.

Liset Landeros knows none of this.

When it comes to the subject of her young marriage, she prefers to describe how her father sang country and western songs at her backyard ceremony.

According to records at the Texas Department of Health, Liset was one of nearly 60 girls in that state who married in 2002 at the tender age of 14 – the minimum age in Texas with parental consent. (A handful of other states sanction extremely early marriages with parental consent: In Alabama, South Carolina and Utah, girls can marry at 14; in New Hampshire it’s 13; in Massachusetts and Kansas, 12.)

In 2002, state social workers informed the young couple that they would advocate charges of statutory rape against James when he became a legal adult at 18, family members say. Liset’s mother said Texas child protection officials also threatened to take custody of her other children if she didn’t break off her daughter’s underage relationship.

In the face of such harsh law-enforcement action, Liset rushed to the altar. She says she and James had planned to marry anyway.

"It was love at first sight," Liset says. "My parents didn’t agree. So I ran away from home and moved in with James."

Today the couple have moved into Liset’s parents’ house on a plot of land outside of town. On the surface, they are little different from thousands of other members of the working poor in Bellmead, a bedroom community outside Waco – a conservative, blue-collar city that is the seat of a county with one of the highest teen pregnancy rates in the nation.

"I’m just taking it day by day," says James, who works 70-hour weeks at a cafeteria in a nearby turkey-packing plant. "We argue sometimes. But it’s always about little things."

During the week, Liset rarely sees her curly-haired toddler, Mersaydiz, 2, unless her mother and constant baby-sitter, Juana Rodriguez, brings her to the restaurant.

On those occasions, Liset dashes outside like a schoolgirl released by the bell. She strides around the parking lot with her daughter on her hip.

"People don’t know how hard this life is," says Rodriguez, 39, an immigrant from Mexico who also married at 14. "I was angry at my daughter. But she is so stubborn. There was no stopping her."

In fact, the bond of too-early wedlock shared by Rodriguez and her headstrong daughter may be another explanation for the perplexing rise in domestic child marriage, experts say. Immigration from developing countries where the practice is the norm, particularly Latin America, may be boosting the number of underage wives in the United States.

According to the National Campaign to Prevent Teen Pregnancy, young girls of Latino descent are bucking a historic national downward trend in teen pregnancy.

One study released in March by the Mid-America Institute on Poverty in Illinois shows that the birthrate for Latinas age 10 to 19 in that state actually grew by 18 percent in the past decade, while birthrates for all other ethnic groups declined.

"We get a steady influx of people from Mexico, and they bring certain traditions with them," says Maria Socorro Pesqueira, the executive director of Latina Women in Action, an outreach organization in Chicago. "There are quinceanera (coming-of-age) parties for 15-year-old girls that send the signal: Hey, you’re a lady now and ready to move on in life."

Liset, a fresh-faced and thoroughly American child bride, never had such a party. But she has definitely moved on in life.

"I want to go back to school," Liset says hopefully, echoing a universal desire that social workers hear from child wives around the world. "Maybe then I can become a cosmetologist, or maybe an interior designer."

She hopes to re-enroll in the 9th grade this spring, after giving birth to a new baby. This time it is a boy. He will be named James, after his father.