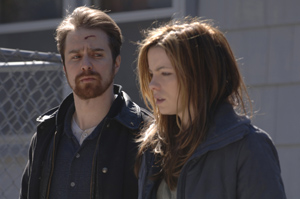 The pristine coolness of freshly fallen snow, the gentle pitter-patter of bird's footprints on a downy bed of white, the disarming calm of unexpected snowfall – these are the images most associated with winter. However, in the movie Snow Angels, it is the unexpected that steals the thunder of the season’s greatest majesty.

This compelling drama interweaves the varied lives of several small-town characters who each have different crosses to bear.

Kate Beckinsale (Underworld) is Annie – a stressed-out, newly single mom. She has a lot on her plate, including her thankless job at a Chinese restaurant and an estranged husband that she’d sooner forget.

Her husband, Glenn (Sam Rockwell), has found religion. He wants to get his family back on track. But Glenn hasn’t taken the necessary steps for a fresh start. His post-breakup behavior makes that evident.

Arthur (Michael Angarano) and new girl Lila (Juno’s Olivia Thirlby) are falling in love. All the while, Arthur’s parents (Griffin Dunne and Jeanetta Arnette) are separating and in the process of moving on from each other.

Meanwhile, funny lady Amy Sedaris (“Strangers with Candy”) isn’t laughing so hard when she discovers that her husband is skipping out on their marriage. Little do any of these characters know that over the course of a couple of snow-capped afternoons, some of them will lose their lives; some, their innocence; others, their trust.

The impetus for such talent to join a project as gut wrenching and profound as this one would, at first glance, seem very calculated. However, many of the stars attached to the drama have surprising reasons for signing on. Beckinsale says her decision to join the cast had nothing to do with the traditional trappings of potential awards and recognition. For her, the choice hinged a bit more on … puppy love.

“I always have a crush on whomever my daughter has a crush on, so I was very keen on working with Michael Angarano,” says the actress.

“Michael has a freshness and an excitement and a kind of guilelessness that is really special that I don’t think every teenager has,” she admits. “He has a wonderful little face that makes you wish you were 16 again.”

Thirlby agrees: “We’ve ended up spending a lot of time together on set and have developed a nice, interesting relationship. We’re very comfortable with each other.”

Comfort would be key, as Angarano and Thirlby have a white-hot onscreen romance filled with all the passion of first love. Scenes between the two are never garish, but still had to convey the fact that these are two people truly infatuated with one another.

Screenwriter and director David Gordon Green’s ability to juxtapose raw human emotion and behavior while maintaining his ability to keep each character sympathetic to the audience is a unique and rare gift. This is particularly evident in the scenes between Beckinsale and little Grace Hudson who plays her daughter, Tara.

Rockwell is quick to acknowledge this.

“What may read as complex about Annie,” says Green, “is meant to be a realistic window into the frustrations of motherhood, especially single motherhood.”

Beckinsale admits to art imitating life a bit. Annie’s experiences, at times, mirrored her own and made it easier for her to delve into the part.

“I really felt a lot of empathy with Annie,” she confesses. “I’ve been researching the working mother situation for the last seven years, so I kind of feel like I know that woman pretty well.”