Married Life: Raising Interesting - and Humorous - Questions About the Institution 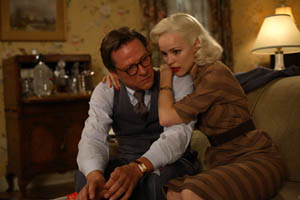 Hollywood has not always set the best of standards for the complicated nature of married life. Everyday existence behind the scenes seems to have gotten more turbulent when the subject is marital bliss.

Yet there are still films that get to the heart of what drives such a relationship. The glamour and glitz of love, juxtaposed with the routine of marriage. One of the latest film attempts is director Ira Sachs’ Married Life.

Based on a story by John Bingham entitled Five Roundabouts to Heaven, the film focuses on a husband, Harry (played by the masterful Chris Cooper), having an affair with a younger woman, Kay (Rachel McAdams). This, we’ve seen hundreds of times.

The catch in this one is that Harry decides to kill his wife, Pat (Patricia Clarkson), because he feels the news of his adultery would hurt her too much. Adding to the mix is Harry's charming best friend (Pierce Brosnan), who starts to fall in love with Kay.

The result: an innovative dark comedy about the nature of adult relationships. Set in the backdrop of the late 1940s, it’s a magnetizing film.

The time period, however, was not the main focus of director Ira Sachs (Forty Shades of Blue).

“The movie recalls the romance of cinema,” Sachs says.

In this nostalgia there are definite nods to the style and poise of the era, but there is also a sense of the film’s universal appeal.

From the costumes to the production design, Married Life succeeds in evoking the feel of its time without making it a gimmick.

Cooper was pleased with the opportunity to work in the style of the period: “People look good in that stuff. They [the costumes] make you behave a little differently.”

There are other innovations present in the film, as well. For instance, even in its nonchalant take on infidelity, the story raises profound questions. How well does someone know his or her romantic partner?

Having been married for 23 years, Cooper remarks, “I continue to find out things I never knew.”

In his portrayal of Harry, Cooper brings this sensitivity and commitment to the role. As an on-screen husband, he is attentive to the nuances of spousal challenges.

In many places, the film feels hyper-realistic. While every event could actually happen, there is a level of suspense that dominates the pulse of the plot.

The limitations of communication in 1949 add to the specificity of certain points in the story. Cell phones weren’t a luxury of the time, for instance.

The possibility of adultery or even love depends on communication, too, perhaps. Ultimately, Married Life succeeds as a film for adults.

Even in its humorous ironies it contains true relational wisdom and insight. Each character is given life by actors who are dedicated to their work.

“You have to believe in your character,” says Clarkson.

McAdams took on a real curiosity for Kay: “I was very interested in what she was struggling with.”

When the subject of marriage and its hurdles is presented in such elegant dress, one can only stop and wonder about the people behind it. At the center of the story is a regard for morality and an interest in the good.

Sachs says, “I liked the fable aspect of the story.”

In each of the character’s final outcomes, there are lessons to be learned and analyzed. What is married life, really? If a film can help us hone in on a better definition, then it’s probably worth watching.