Sean Faris: Even A Broken Back Can't Stop the Actor 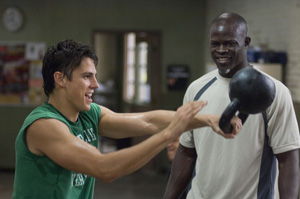 In natural habitats, the male usually asserts his dominance through posturing and intimidation. Should his opponent fail to relent, the dominant male will force the weaker to submit to his will via violent activity. That’s the way things get done in the wild.

In Never Back Down, they kick ass first and take names later. Rising star Sean Faris shines as Jake Tyler.

He’s the son of a single mom who can’t seem to keep her kids on the right track. She tries in vain to keep the boys on the straight and narrow by moving frequently to keep them from bad influences.

Jake, like most guys growing up without a dad, is filled with misguided anger and rage. What better way to channel those feelings than through a little bit of butt kicking?

That opportunity comes one afternoon when the young loner mistakenly interrupts what he thinks is a fight. In actuality, he’s just gotten his first introduction to Mixed Martial Arts, or MMA. This sport incorporates many of the most popular fighting disciplines while taking some very important cues from the extreme scene.

While MMA may have a large following, it doesn’t get the airplay of … let’s say, the NFL or NBA. Its fuel-charged, boys club vibe may do a lot for the sport, but at first glance might turn away female moviegoers.

“Hopefully we can get more women in there to see it,” says Faris.

One look at the film’s trailer should ensure little to no trouble in that department. Never Back Down is filled to the brim with shirtless aggression and ripped abs.

Appearing in a project like this would gladly allow any red-blooded American male the chance to flex his muscles. Faris is no different; he relished the idea of getting jail-buff to play his part.

“I’ve always been in really good shape, but they wanted me to be what the script said at 175 [pounds]. Well, I naturally walk around at 155, 160 so I had to really try to gain the weight.”

Faris was very well aware of the sport prior to his joining the production. He even counts himself among one of its legions of fans.

“I’ve been watching [MMA] since back in the day when there were no rounds,” he brags.

Between his interest in the subject matter and his kinship with his character, the actor was born to play Jake.

“I think that everyone had to have a little piece of their character in them,” he says. “I identified with [his family] moving around. I moved from Texas to Cleveland, Ohio when I was 12-years old.”

Faris says he could also relate to the angst felt by his character.

“I had plenty of displaced anger when I was growing up,” he admits.

A lot of his growing pains came from the constant challenging he received at the hands of his peers. Faris recalls numerous times of walking into parties and being provoked – for no good or apparent reason.

Despite those early issues, though, this is one actor who has remained grateful for being able to overcome early adversity.

“I know I’m living my dream,” he says, proudly.

That dream will hopefully lead this multi-faceted actor down a number of avenues. He hopes to build a future as a producer – a feat that he’s already begun. Faris is currently working on a new movie with a good friend that has him assuming the coveted leadership role.

Along with his behind-the-scenes aspirations, he also hopes to one day star in a comedy and take roles that allow him to step outside of the box. His steely determination puts him in the same league as superstars like Brad Pitt and Johnny Depp, who started their careers being ogled for their leading man looks, but soon stepped into a level of credibility that made them legends.

But for now, it’s the honor of appearing in this well-rounded, fight-themed action-drama, reminiscent of predecessors like Rocky. Also appearing with Faris in Never Back Down is Academy Award-nominated actor Djimon Hounsou (In America). He plays the Florida gym owner who becomes a mentor to Jake.

Honsou’s presence onscreen gives the film a level of street cred that very few other movies of its genre have scored. Faris is well aware of the cache that Honsou's fame lends. His reverence for the actor is even present in the way he speaks about him.

“He’s so sweet and so respectable. I mean, just so down to earth,” says Faris. “Djimon doesn’t have to say a word. He’s a very quiet guy, actually. But when he does speak, he commands this type of respect just with the tone in his voice.”

Those words are nice, but one has to wonder if he’d star with him again. During the shoot, Faris, while in a scene with Hounsou, was body-slammed with significant force. The end result was a broken back that left Faris sidelined for a good portion of the shooting schedule. He was relegated to wearing a back brace on set for nearly six weeks.

Faris is adamant that the accident did little to deter the good vibes during production between him and his co-star, Hounsou.

“I will work with that guy any day of the week and twice on a Sunday. And I DO NOT like working on weekends.”

Never Back Down releases in theaters March 14.