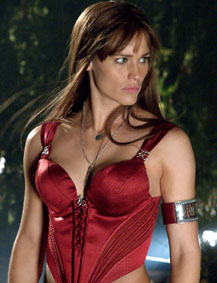 Jennifer Garner is that rare Hollywood combination of sex symbol and tough chick. She can melt your heart with a smile, or knock you senseless with a roundhouse kick.

The 32-year-old actress has parlayed this edgy sexuality into a TV career playing super-agent Sydney Bristow on "Alias," which has moved to its new Wednesday-night time slot, and a movie career that returns her to the role of comic-book hero Elektra, which she introduced in the film Daredevil, and now reprises in the action flick Elektra, which opens Jan. 14.

In her Los Angeles hotel suite – in an interview conducted before she reportedly fell ill from either a virus or nerve damage caused by an accident while performing a stunt on "Alias" – she talks about the pain and suffering she endured to bring Elektra to the big screen, and how her life has changed since she divorced actor Scott Foley and became tabloid fodder on the arm of Ben Affleck.

You once told me that your body was covered with lumps and bruises the first time you played Elektra. Why would you want to put yourself through an ordeal like that again?

In the moment, you’re driven by adrenaline, so you don’t feel the pain. You’re so into the fight that you don’t care if you’re getting a little beaten up.

That explains why you did the first movie. After you had time to reflect on the experience, why would you repeat it?

The pain doesn’t really bother me that much. I grew up with my feet crammed into pointe shoes. Pain is not something that controls my life. I knew it would hurt, but I took a deep breath and dove into it.

OK, forget the pain. Why did you want to play Elektra again?

Because her story wasn’t told the first time.

How about a quick rundown on the plot of the new movie?

She is a bitter and angry killer-for-hire. She barely has enough of a soul to have a pulse. Her latest targets are a 13-year-old girl and her father, and the young girl has a lot of spunk and attitude, so she reminds Elektra of herself. Instead of killing her, she protects her. In the process, she finds herself again and battles the bad guys.

You did a lot of martial arts training the first time. Did you have to do it again?

Would you call yourself a martial artist?

No, I would say I was someone who uses her dance background to emulate martial artists.

How were the injuries this time?

I busted my finger open. I busted my thumb. I got an average amount of bruises, but not as bad as on Daredevil, where there was a lot of hand-to-hand combat that went on for a while. Our fights in this movie were short, brutal and real.

Are you amazed that you’re an action star?

I can’t get over it. Who am I, and how did this happen?

But you enjoy it?

It’s my favorite thing ever. I love what it does for my confidence. That comes from starting with nothing and having to learn how to do something, like fighting with swords.

After the comedy 13 Going on 30, I thought you’d be done with Elektra.

I can only do one film a year because of the TV show, and we needed to do this character quickly before the public forgot about her.

These last couple of years have been rough for you in your personal life. How are you holding up?

I am a good girl. I was raised in a family of good girls. I’m a prude. I’ve only been drunk a few times in my life. So it’s hard for me to be part of a scandal. You want to go out and defend yourself in a global court. The reality is that you don’t get a chance to do that. So, I’ve learned not to read about it. I ask my girlfriends not to talk about it because I don’t want to hear it, and I ask them not to laugh about it because I don’t think it’s funny.

You can ignore the stories, but you can’t ignore the photographers chasing you down the street.

That happened overnight, and it’s not pleasant. They pursue you. It feels like they’re chasing your soul down the street. For a while, I became overly vigilant. I tried to spot their parked SUVs, and I probably scared a bunch of poor soccer moms in the process. But I’m dealing with it better than I did six months ago.

It’s an ugly and unfortunate part of something I love, and I’ve learned to accept it as something that is connected to the work I’ve chosen.

How do you deal with your sexy image?

(Blushing): Every once in a while, there will be a picture of me out there that has been so re-touched that I don’t recognize myself.

Are you re-touched right now because you look pretty good?

(Laughing): You’re seeing me through a filter.

You don’t buy into this whole beauty thing, do you?

You can’t buy into it, or you’ll be brokenhearted when it goes away.