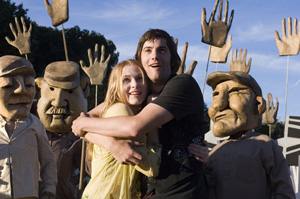 Bridging the generation gap between Beatlemaniacs, the New Beverly Cinema is giving young and old fans four chances to catch their latest double-bill: A Hard Day’s Night and Across the Universe.

In 1964, the Beatles made a hilarious and partially true mock-umentary about their lives in the spotlight. Filled with then-new Beatles songs and cheeky humor, A Hard Day’s Night was the first Beatles movie, capturing Lennon, McCartney, Starr and Harrison during their age of innocence as they dealt with the success of their first few albums (and singles “Love Me Do” and “I Want to Hold Your Hand”).

High on life (they weren’t introduced to drugs until later that year) and wearing signature matching suits, the boys are chased around London by screaming fans, called sissies by McCartney’s grandfather and, eventually, make it to the stadium where they play a show for more screaming fans. The movie is referenced in the opening scene of Austin Powers 3: Goldmember.

Sit through A Hard Day’s Night and you will be treated with part two of the Beatles-tastic double feature, Across the Universe, which embraces the drug-addled later years of the Beatles’ discography, cramming every second of film with references to the most successful band of all time. All of the characters have names derived from Beatles songs (Jude, Sadie, Desmond, Mr. Kite, etc.) and the plot is propelled by 34 (count ’em) Beatles tracks, which are often sung in lieu of dialogue.

It’s a full-on Beatles musical with enough allusions and references to keep fans sitting through the lackluster storyline. If you stay for the credits of Across the Universe, Bono will sing “Lucy in the Sky with Diamonds” for you.