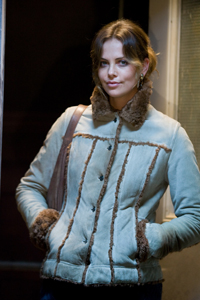 Sleepwalking is a gritty, realistic portrait of a family in crisis struggling to attain some sort of normalcy. In trying to outrun her troubled past, Charlize Theron’s character, Jolene, makes horrible choices that result in her 30-year-old brother James (Nick Stahl) taking custody of her 11-year-old daughter Tara (AnnaSophia Robb).

Though James does what he can to help, he’s ill equipped to care for a child. Their journey together quickly involves unemployment, foster care, running away and even murder.

“You know, it just stayed with me,” Theron says about what attracted her to the project as both an actor and producer. “It’s hard to articulate. When I read material, I either tap into something or I don’t. Usually you can tell the next morning if you wake up and you’re still thinking about it.”

“That’s usually a good sign, if something scares you or something stays with you,” she continues. “I thought it was beautifully written. I felt that it wasn’t a watered-down version of a dysfunctional family. I thought it was pretty real as being authentic towards families out there in these situations, and it carried a philosophy that I really believe in: that at the end of the day you have to be responsible for your own life. I didn’t want these people to sort of wallow in self-pity. I wanted them to kind of stand up and wake up at some point and realize that they’re the driver of the bus.”

The bulk of the storyline focuses on the relationship and trials of James and Tara. In regards to why Theron wanted to produce as well as tackle the small, but pivotal role of Jolene, she explains: “As an actor, I liked how flawed Jolene was. I liked taking on a character that in the first 10 minutes of the film does something really hard to forgive and to try to play that as authentic and real and truthful as possible, being very much aware of the circumstances this woman was in and [hoping] that somehow the story will service why she is the way she is.”

Dennis Hopper portrays James’ and Jolene’s hard as nails father in the film. Though it was a struggle to film in the winter in Saskatchewan, he has nothing but praise for Theron’s skill as a producer.

“The bad thing was the weather,” he tells. “It was 25 degrees below zero, sometimes 65 degrees below zero with the wind chill factor. That was tough. We were very happy when a scene was over and we all ran back to our trailers, but Charlize was there every moment. If you needed more long johns they were there. She was a very, very hands-on and very creative producer.”

When asked if she enjoyed the job of producing and if she was happy with the way the project turned out, Theron offers, “At the end of the day you really can’t sit around and wonder if people are going to know whether you did the job or not. There’s no way that I could take the credit if I didn’t feel like I did the job. I really liked the job. It’s hard to call it a job, you know? At the end of the day it’s just the idea of taking a story and somehow servicing it on all levels to try and tell it the best way that you possibly can.”