Blindsight: Blind Tibetan Teenagers Touch the Top of the World 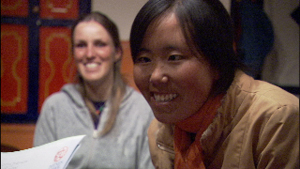 In 2002, director Lucy Walker’s Devil’s Playground, a film about Amish teenagers, made quite an impression on audiences.

“I sort of got a reputation for being able to work with difficult to access, remote worlds,” Walker offers. “With people that might have trouble opening up on camera.”

While Walker was mixing it up with the Amish, blind mountain climber Erik Weihenmayer was triumphantly scaling Mt. Everest and sight-impaired Sabriye Tenberken was officially adopting the name Braille Without Borders (BWB) for her center for the blind in Lhasa, Tibet.

A staunch supporter of opportunities for the blind, Sabriye reached out to Weihenmayer and asked him to visit her school and speak to the kids about his inspirational accomplishments.

Weihenmayer agreed, and even suggested he do more than talk. He hatched a plan to take six of BWB’s fittest teens on a mountain climbing adventure up the north side of Mt. Everest.

Once they decided it was a go, Tenberken and Weihenmayer reached out to the film community to document their climb.

Walker, who happens to not be able see in one eye and has had vision problems her entire life, excitedly accepted the job of director.

“I could really relate to this feeling that I could go blind because I only have one eye,” Walker admits. “What would it be if I were the filmmaker who went blind? Plus I’m a big Tibet fan. It was a no-brainer. I wanted to direct it pretty badly.”

From there it was a scramble to get ready: what equipment to bring, how to deal with the extreme altitude, what type of crew to gather and how to prepare physically, spiritually, mentally and professionally for the task ahead.

As for the biggest challenges Walker encountered, “it was one big challenge party,” she confesses.

In addition to being infected with head lice, which spread to her eyelashes, the biggest problem was the lack of oxygen on the mountain.

Safety became one of the central issues and themes of the documentary.

“How dangerous is too dangerous?” everyone had to ask. Was pushing six blind teenagers to the top too risky? After all, Weihenmayer is the only blind person to have climbed the “Seven Summits,” the tallest peak on every continent, so he wasn’t going to back down.

Neither were the professional seeing mountain guides paired with the blind teens. It was Tenberken who expressed the most concern, feeling responsible for the livelihood of her students.

“I tried to keep a cool head about supporting everyone while not taking sides,” Walker reveals. “Erik and Sabriye are wonderful leaders with good points of view.”

In fact, Walker believes this dilemma became the most interesting facet of the film. Is Weihenmayer right, or is Tenberken right?

For Walker, one of the highlights of filming Blindsight was being around the kids.

“These are the coolest kids in world,” she gushes. “They have such an enlightened perspective.

“What I want is for people to discuss it [the film],” she tells, “come out arguing, excited, saying, ‘wow he [Erik] was the coolest and she [Sabriye] was a drag,’ or ‘she was amazing and he was insane.’