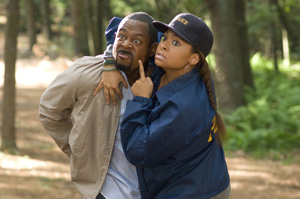 When an overprotective dad does whatever it takes to avoid losing his daughter to a faraway college, comedy ensues. Martin Lawrence plays an overzealous dad in this new flick, College Road Trip, while his daughter, played by Raven-Symoné, just wants to experience life on her own.

The plot is relevant to first-time college students’ experiences on many levels. The transition from home to college is a major step for the parents and students, and College Road Trip expresses this transition vividly; for instance, by using a cartoon style map to show the route of their trip and the stops along the way.

The film shows how attached Lawrence’s character is to his daughter and the sincere devotion of a father to his only daughter. Frankie Smith’s song, “Double Dutch Bus,” allows the audience to see the hilarious bond between the two.

Though Lawrence and Symoné are both a bit annoying and silly in the film, Lawrence still brings his zany, comedic personality; and Symoné does the same. In fact, Symoné’s character in the film isn’t too far off from her television character in “That’s So Raven.”

The worst part was the predictable ending, but it is a fun family film. Parents, teens and children will all be able to easily relate to it.

Donnie Osmond makes a cameo appearance, as well, when he and his daughter are on a college road trip of their own and encounter Lawrence and Symoné. Osmond, like the rest of the cast, is a bit annoying too with all the singing he does.