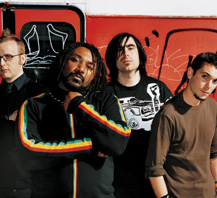 In the colorful patois of reggae-speak, a reference to "Babylon" usually refers to some sort of struggle, like being stuck in the system. Skindred didn’t know when they released their debut album Babylon two years ago that the title would turn out to be prophetic as the disc spun around in a record business funk instead of in CD players. But for those who managed to hear the band’s mix of reggae, nu-metal and rap-rock, they liked what they heard.

The British quartet forged on, criss-crossing the U.S. tirelessly on tour after tour. After a re-release on a new label (Lava) with several fresh tracks added, Babylon is finally going gangbusters.

Standing in the middle of a field in Florida watching the stage being prepared for his band, Skindred’s lead singer Benji Webbe let it be known that he never had a doubt about success.

"I’m not in the business of giving up. I’ve got too many good things happening for me in life to be giving up. Those are not words I use. If I was working in a garage sweeping up after people, at the end of the day, I wouldn’t give up. You’ve just got to keep pushing forward."

Babylon’s first single is a ferocious cut called "Nobody" that has Webbe rasta-rapping over a bed of buzz-saw guitar, sounding like Rage Against the Machine, Kingston-style. During the filming of the song’s video, bassist Dan Pugsley chipped his tooth, drummer Dirty Arya split his finger open and axe-man Mikey Dee busted his guitar neck. Despite his band’s onstage antics, Webbe was more taken with what happened in the audience.

"The people who were directing the video had invited down all these kids who were into punk and into reggae," the singer explains. "It was really weird, because when we first got there, all the black kids were on one side and all the white kids were on the other side.

"When the music started, everybody was just all in it together. It was a real sense of unity. By the time we finished shooting, everyone was standing up clapping and applauding. It was a real good day."

Webbe says that Skindred is practicing an acoustic version of the frenzied song so that they can rip things up a little quieter at in-store and radio station appearances.

Having toured with Korn, Chevelle and Breaking Benjamin, Skindred looks for musical inspiration wherever the road leads. Webbe adds that, "America’s a big place with lots of things I’d like to check out. So as we go along I’ll be pulling out my map and seeing what we can see!" Surprisingly, the ragga-rockers have not yet played in Jamaica, but Webbe hopes to someday get there and lay down some tracks with the legendary rhythm section of Sly Dunbar and Robbie Shakespeare.

Webbe’s energy seems to be endless, and realizing that, it is really no surprise that he pulled Skindred and Babylon back from the brink of obscurity. As he succinctly sums it up, "This is not a hobby; this is my life. I’m 24/7 Skindred!"