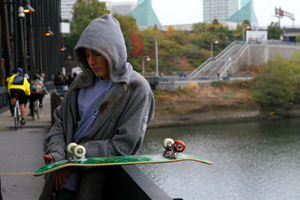 Alex (newcomer Gabe Nevins) doesn’t think he’s ready for Paranoid Park, the eastside skate park in Portland, Ore. Even though he can carve on the bowl and airwalk with other amateur skaters, his premonition about the skate park is eerily accurate in Gus Van Sant’s Paranoid Park.

The story, adapted from a book by Blake Nelson, takes a look at a dark inciting incident that changes Alex’s life forever.

Van Sant is an acquired taste. His films have an ephemeral quality that can be both lyrical and annoying. He uses Super 8 skate footage to bridge the gaps in the story, but the footage does not advance the story; it mires it.

In a bold move, Van Sant uses the much-maligned MySpace as a force of good instead of evil. The director cast the teens from their profile pages, and the neophyte actors demonstrate a remarkable aptitude. Unfortunately, not enough happens.