Colin Farrell: Swaggers into Phone Booth and Comes Out a Movie Star 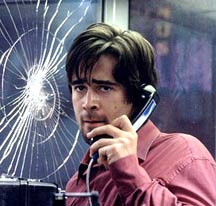 It’s safe to say that a decade or two of mineral water, intervention parties and smokeless nightclubs have taken its toll on Hollywood’s leading men. These days, settling down in the Pacific Palisades with a family and the required SUV is far more fashionable than following the credo of "live fast, die young." Even notorious slugger Russell Crowe is soon to wed to his longtime girlfriend in a small ceremony Down Under. Of course, we’re glad that our stars are alive and kicking, but some audiences wouldn’t mind seeing a man on screen who could just as easily be a drinking buddy.

So to many of us debauched ladies (and not-so-gentle men), a new rogue on the scene with an Irish brogue is a breath of unfiltered air, a throwback to the carousing days of Sammy, Dean and Steve McQueen. But Dubliner Colin Farrell wants to be known beyond his status as the life of every party on the Strip or Britney Spears’s man candy. The 26-year-old actor is certainly becoming aware of how his open and honest ramblings to the press have affected his public persona. And you know what? In Farrell-speak, he really doesn’t give a fuck.

"I don't say or do things for shock tactics," Farrell says. "I mean, even I read things I've said and think, ‘What a fucking animal.’ But at least if I'm honest, I can hopefully be accountable for everything I say. It's when I try and start playing games that it'll come back and bite me in the fucking ass. You're never gonna please everyone, so I just try and stay on the straight and narrow. My straight and narrow, of course."

Farrell’s reputation may have made him the perfect choice to play the lead in Phone Booth, the story of a slick media consultant who gets his comeuppance when a sniper holds him hostage in a New York phone booth. Garnering a role that was once touted for such A-listers as Will Smith and Jim Carrey was a coup for Farrell, who has gone from small roles on Irish TV to leads alongside Ben Affleck (Daredevil) and Tom Cruise (Minority Report) in just a handful of years.

Perhaps nobody knows more about Farrell’s potential than Booth director Joel Schumacher, who worked with the actor in his breakthrough role as a Vietnam recruit in 2000’s Tigerland. Schumacher is still impressed with his ability to scale emotional heights on screen.

"I think he does a magnificent job," says Schumacher. "And the degree of extraordinary emotions he has to go through——every one in the book. He certainly walks into the phone booth as one person and walks out another person. I think [it’s a challenge] for any actor of any age to go through that: the confession, the performance, how he breaks down in stages and even the dark humor in it."

And just as he’s rejected L.A.’s demands of ultra-clean living, Farrell refuses to analyze his sudden rise to fame.

"In a certain respect, I have been an overnight success. It happened very fast, and I can't make fucking sense of it…there is no sense to it," he notes. "But I've never seen this as anything but a natural progression of my life. If you look at what I've gone through in the last two years, from an outside perspective, it would not look natural at all. But because I'm living it, it just feels like a natural progression."