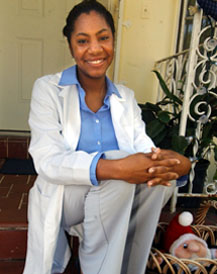 Don’t be completely fooled, though.

"I have no problem doing the geek thing," said Walker, who has dreamed of being a doctor almost as long as she can remember.

Walker recalled that most of her science teachers in middle and high school were men who seemed to direct their attention to male students.

"I guess they figured girls wouldn’t have an interest in it or they’d go into other fields," Walker said.

That’s the sort of attrition of bright women and minority students in the sciences that educators at St. Thomas University hope to stop.

This month, St. Thomas broke ground on a new science building – and with it, an expanded commitment to encourage minority and female middle and high school students to go into the sciences.

The 32,000-square-foot building will feature display areas where grade-school students can watch science experiments in progress. Its classrooms and laboratories will have glass walls, so visiting kids can watch professors and college students at work. It will have a greenhouse and a rooftop observatory to put science at their fingertips.

"We want grade-school and middle-school children to raise their awareness of careers in science, and to collaborate with ‘K’-to-12 educators by living science," said Adrienne Vynne, chair of St. Thomas’ Natural Sciences, Mathematics and Computer Sciences department.

"Our students will actually do experiments with high school students," Casale said. "On a modest level, the new building will be part science museum for the local community."

The $6 million building, scheduled to open in 2006, will carry the name of Carnival Cruise Lines, which is donating $1 million to the project.

National science education experts say America’s colleges must recruit more students like Walker from demographic groups that haven’t been drawn to the field in large numbers. That’s one way to keep up with foreign competition and market demand, they say.

The Congressional Commission on the Advancement of Women and Minorities in Science, Engineering and Technology Development produced a report in September 2000 describing diversity as America’s untapped advantage in science-related fields.

"Women, minorities and persons with disabilities currently constitute more than two-thirds of the U.S. workforce," the report said. "It is apparent that just when the U.S. economy requires more SET science, engineering and technology workers, the largest pool of potential workers continues to be isolated from SET careers."

"We’re seeing progress, but we need to see dramatic progress, which has not been achieved," said Mendoza. "Getting middle school and high school students to see and recognize what it is to be a scientist is right in line with our recommendations."

Perhaps the most important role models for young would-be scientists will be the college students just a few years ahead of them.

"I definitely see myself showing that if I can do this, then a bunch of people like me can do it," Melissa Walker said. "I want to be a role model for other people."