Gossip Blogs: Too Juicy For Campuses 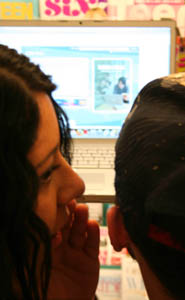 Gossip blogs are the newest craze on college campuses, mimicking the CW’s hit TV show “Gossip Girl.” The character Gossip Girl is an undercover blogger who reports on all the dirt to the overly privileged high schoolers of New York City’s Upper East Side. The martini drinking, drug using, couture wearing cast has created a show that has become the latest trend.

Like any new fad, imitations were sure to follow, especially in Los Angeles. USCene, Campus Gossip, the Row Run and USC Buzz are just some of the many social blogs of USC. Most of the blogs read similarly to Gossip Girl as they report the latest parties, styles, spottings and of course, the down-and-dirty hook ups.

Before it was brought to an end in November 2007, USCene had details of every party and every guest – supplemented with embarrassing photos. They wrote under the pseudonym “The Q” (formally known as the Quality) and vowed to “fill students in on USC’s who, what, where and when.”

Here’s the problem: USCene was malicious, defamatory and potentially harmful. They started a rumor that one girl was pregnant, they said another person was HIV positive and ruthlessly bashed sorority pledge classes. It was taking a toll on the Greek community and tainting the school’s reputation.

“We really made a stink about it,” Ashley Howell, Greek Senator of USC’s Undergraduate Student Government, says. “We told them that the Student Judicial Affairs and Community Standards would make their lives very difficult if we ever found out who was behind it.”

Howell’s campaign against USCene was a success when the blog stopped posting new threads last winter.

“We didn’t even have to pull out the big guns to stop it,” Howell says.

There are currently 60 college campuses that support the blog, including USC, UCLA and Berkeley. The site proves popular with thousands of hits and comments each month. But many students are fighting back against the “always anonymous, always juicy” gossip.

“The main issue with these web sites is that you can’t remove the posts,” Howell says.

According to JuicyCampus’ FAQ page, those who wish to remove a comment have little to no choice in the matter. Under U.S. law, sites like JuicyCampus.com generally bear no responsibility for what their users post. They all claim to have the simple mission of enabling online anonymous free speech on college campuses.

“But as soon as they start writing defamatory comments, their words cross the line of freedom of speech and become illegal,” Howell says.

Students are protesting the site simply by not visiting it while some schools, like Pepperdine University, have banned JuicyCampus.com from its Internet server altogether.

The purpose of these blogs is to facilitate the networking of gossip that naturally exists at every school. But if you ask me, it’s just cyber-bullying at its finest.