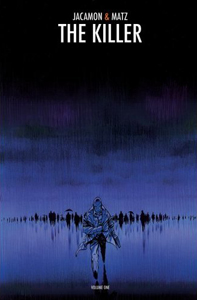 France’s gritty, unflinching look at a professional killer on the verge of cracking comes to the U.S. Written by Matz, it’s at times a conventional story of a calculating hitman kept absorbing by the sheer unapologetic nihilism of his interior monologue and by the fantastic artwork by Luc Jacamon, which manages to look both cartoony and realistic, making for an arresting blend.

Told in globetrotting flashbacks as the Killer awaits the arrival of his target, we get a glimpse of the life of a callous murderer that feels like the real thing. In the tradition of Jean-Pierre Melville, it captures a noir-infused Paris, with atmosphere to spare and enough sex, double crosses and hard-boiled attitude to leave you wanting more.

The Killer, Volume 1 is currently available.