Mia Doi Todd: Straight to the Heart of It With Daggers 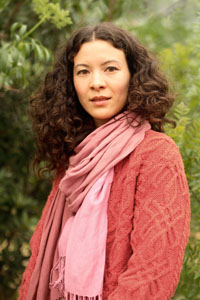 Could Los Angeles be the city of love? Local singer-songwriter and L.A. native Mia Doi Todd seems to believe it is.

Enough so that she was drawn back here after leaving for college, where she recorded her first record, The Ewe and the Eye, in 1997. Todd speaks lovingly of her native city, finding inspiration both in its Latin musical culture and in the music of transplanted artists Joni Mitchell and the late Alice Coltrane.

But do not be misled into conflating “love” with “peaceful easy feelings.” Todd’s music has always trafficked in emotional intensity, even in its most lyrical and aesthetic gentleness. From their earliest, purest voice-and-guitar incarnations on albums such as Come Out of Your Mine (1999) and Zeroone (2001) to the recently released album Gea, Todd’s songs reflect what she calls “emotional matter.”

Aside from the highlighted sound of the Indian harmonium on Gea, she cites the influence of Indian music on her own songwriting, exhibited in her early interest in songs that were much longer and complex. The opening “River of Life / The Yes Song” on Gea clocks in at almost 11 minutes, but not one second of it is frivolous or forgettable. Like a raga, it draws the listener in and places him or her in a space for reflection and turning inward.

As for the emotional matter, she sees a relation between the sometimes confrontational theatricality of Butoh with playwright Antonin Artaud’s “Theater of Cruelty,” another surprising influence not on her stage performance, but on her approach to songwriting itself. As Artaud sought to engage the audience often through visual disturbance, Todd seeks to sonically and lyrically engage us with her subconscious.

We can be lulled by the lushness of her chords and voice, but we will inevitably be confronted with a mixture of strong feelings, whether of loss, hope, friendship or pain. The songs “go straight to the heart of it,” she muses, pausing thoughtfully before adding, “with daggers.”

Gea holds layers of meaning for her. It is at once a derivation of Gaia, the Greek earth goddess, and a deliberate reference to the prefix “geo,” also meaning “earth” but without the masculine connotation.

To Todd, the word “gea” reflects the “feminine, healing, regenerative aspects of earth.” Not surprisingly, her songs sound like they come to her, and from her, naturally. The word is pronounced “jheeyah,” just like the Portuguese pronunciation of “dia,” which she chants in the opening song of the album. So Gea, understandably, reflects a more internal time.

She has chosen to work with an even smaller nucleus of people, handpicked, she says, because of the artistic kinship she feels with them. The ensemble has a decisively non-pop and even non-Western feel to it.

She cites Alice Coltrane, who was both a talented jazz pianist/harpist and Hindu mystic, as a major influence. One can hear echoes of Coltrane’s lyrical harp in Todd’s graciously plucked modal chords, but that is not the only connection Todd feels to either Los Angeles or to Eastern spirituality.

Todd cites a culture that “centers around love, openness, community” in Los Angeles that she has integrated into her music, making the city seem more like a West Coast Rishikesh than the World Capitol of Sprawl. But with Todd’s songs and the dream-like yearning for transcendence they evoke, maybe there’s redemption yet-to-be-realized for the City of Angels.