Ludo: You're Awful, I Love You
(Island) 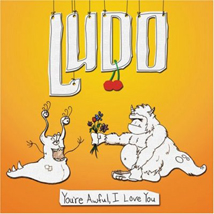 The CD’s title, You’re Awful, I Love You, says everything about this album. It’s an album of contradictions and oppositions that end up working well together.

Songs jump from incredibly catchy and offbeat tracks, such as “Love Me Dead” and “Drunken Lament,” to mellow, emo songs like “Please” and “Streetlights.” At first, the sudden transitions may seem a bit jarring, but after another listen, the suddenness becomes fitting.

The album almost sounds like a compilation from two different bands until you notice that there’s an underlying similarity among all the tracks.

You’re Awful, I Love You is currently available.