Rockets from the Crypt: R.I.P.
(Vagrant) 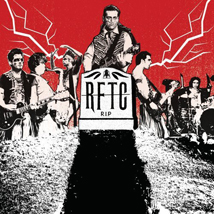 Since the mid-’80s, singer/guitarist John Reis has woven in and out of several bands. Outlasting well-known projects Drive Like Jehu and Hot Snakes, and overlapping with Sultans – a band on Reis’ own Swami Records—Rocket From the Crypt spent nearly two decades creating rock ’n’ roll that would mesh with the original ’90s wave of Dischord-style hardcore and emo.

But mere months after the demise of Hot Snakes, RFTC would end its run on Halloween 2005 with an official funeral, a final concert to celebrate the band’s death. R.I.P. captures this last performance at San Diego’s Westin Hotel with a CD/DVD combo that is necessary as a complete set.

The DVD reveals Reis as he’s carried to stage on a bloody stretcher, rising to position in Screamin’ Jay Hawkins gear while the band plays an instrumental version of “I Put a Spell on You.” The concert on DVD is extended significantly from its audio counterpart and largely shot through a voyeuristic peephole view, making it feel as though to watch is to intrude on an exclusive event.

The sound here is excellent for a live record, and no moment is wasted, seeing as the band didn’t exactly have many downers to offer.