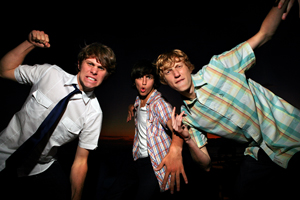 The MTV logos have been painted over, and the cow skull was stolen almost a year ago, but the underage members of A Cursive Memory are still putting miles on the sin-tainted RV from last year’s season of “Road Rules.”

“When we got it, we found a half-empty box of condoms under the sink,” Colin Baylen, one of the band’s two singer/guitarists, says.

“Yeah, and a pair of crusty underwear, too,” Shaun Profeta adds.

Baylen and Profeta, along with band mates and fellow South Bay-ers Mark Borst-Smith on bass and keys and Dillan Wheeler on drums, are sitting in the corner booth at a Denny’s in Anaheim, wolfing down chicken fingers and cranberry juice before playing their record release show at Chain Reaction.

Dave Stone, one-half of ACM’s management team, is sitting amongst them, adding information between bites of a Moons Over My Hammy©.

“Filming for the season had wrapped and we were going to sell the RV, but they were about to go on tour and needed a van, so we gave it to them,” he says.

The “we” is Bunim-Murray Productions, the umbrella over ACM’s management’s company, M Music. Bunim-Murray is best known for their creation of a little show called “The Real World,” and as its Vice President of Music, Stone’s job is to break unknown artists through the company’s numerous “reality-based” shows, including “The Simple Life,” “Keeping Up With the Kardashians” and, of course, “Road Rules.”

When the popular production company launched its music management division a few years ago, Stone discovered A Cursive Memory by doing a random search on the music Web site Purevolume.com. One listen to their hook-infested pop songs and he agreed to get them a record deal – as soon as they graduated from high school.

Baylen, Profeta and Borst-Smith, then sophomores, spent their last three years of high school writing songs and opening for bands like Jimmy Eat World and Boys Like Girls. Last year, Stone made good on his promise, helping them ink a deal with Vagrant Records.

The boys spent last fall filming themselves running around the sidewalks of Hollywood, chasing celebrities into restaurants with an ’80s boombox the size of a TV set and a handheld video camera while belting out their first single, “Everything,” filming their music video and angering both celebrities and paparazzi in the process.

Night after night, ACM, following tips called into Stone’s cell phone by the celebrity website TMZ.com, waited outside of restaurants to bop around and lip sync their single, using the celebrities as background props for their first music video. Responses weren’t all negative. Excerpts on their MySpaceTV profile show Kim Kardashian, Jerry Springer, Hayden Panettiere and Nick Cannon all giving props to the bandarazzi project, some even trying to sing along.

Over half a million MySpace users watched the fruits of their labor in its first week alone. Out of 300 hours of harassment, only the best made it into the three-and-a-half minute music video for “Everything” and in it, they are seen running alongside Britney Spears’ car and pissing off Perez Hilton.

The concept is reminiscent of a naked Blink 182 tearing around street corners to the tune of “What’s My Age Again?” This is no coincidence.

But the band doesn’t copy the pop punk kings, preferring to use them as a base for their hook-heavy songs.

The keyboards croon like Andrew MacMahon’s piano in some songs and dance in the background like Motion City Soundtrack in others, and unlike some bands out there, these teens write every note of their infectious pop goodness.

In between mainstream marketability and actual talent lies A Cursive Memory, four teenagers from South Bay who practice in the same garage as HelloGoodbye and love getting fan-baked cupcakes.