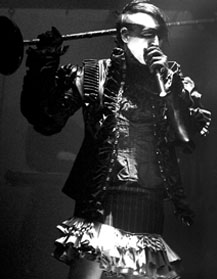 What would it be like to live a day in Marilyn Manson’s shoes? Falling to one’s death by standing high above the ground on those industrial-sized platforms would be one concern. But how about having to live up to his shock-rocker, anti-Christ superstar image? Near impossible. But it is a bed that Brian Warner – also known as Marilyn Manson – has made, so now he must lie in it.

And lying down seems to be exactly what Manson has chosen to do. Having released his "farewell compilation," a greatest hits album, in late September, Manson failed to live up to his oh-so-shocking status on his latest visit to the Wiltern.

Don’t get me wrong – the show was a glammy explosion of sights, sounds and costumes, and the band sounded as in sync as well-choreographed fireworks. Any of the musicians in the current lineup could arguably have sold their souls to the devil in exchange for the skill to rock out.

But the night still seemed incredibly tame in comparison to the expectations drummed up by Manson’s masterfully orchestrated marketing machine. Remember, this is a man who is author of a best-selling autobiography, a university-level speaker, a former Rolling Stone pin-up, and an actor set to begin shooting for a role as the Queen of Hearts in a film version of Lewis Carroll’s Alice’s Adventures in Wonderland. No stranger to the spotlight, Manson has indeed become a mainstream antihero.

On his final night of a three-night run in Los Angeles, Manson appeared through the smoke in a short black tutu, a half-shaved head, and – oh yes – those platform shit-kicker boots. He is reportedly appears as a different character in every city, with the identity of the character on this night being an uncertainty. Perhaps he was dressed as one of those animated, Japanese-techno dolls?

Though the lineup has changed over the years, Manson’s longtime bandmate Madonna Wayne "Pogo" Gacy smashed samples and keyboard notes as expected. Former Nine Inch Nails drummer Chris Vrenna subbed for Ginger Fish who was injured in a stage accident in September. Now-bassist Tim Skold got involved with the band in 2003 when he co-produced The Golden Age of Grotesque and has been on board ever since. Rounding out the circle was former Danzig guitarist Mark Chaussee, who is temporarily replacing John 5 who left the group earlier this year. As a collective sound, the band was electrifying.

Though the stage production and theatrics vibed like an over-the-top rock operetta, the night felt mostly like a Top 40 revival. Much like their recently released Lest We Forget: The Best Of, Manson’s crew incorporated all the singles fans expected including Depeche Mode’s "Personal Jesus," Soft Cell’s version of "Tainted Love," the Eurythmics’ "Sweet Dreams (Are Made of This)" and "Dope Show" from the Mechanical Animals record.

Yet the most controversial sight of the evening came from the heavily eye-lined teen sitting next me when she began cussing at a neighbor and spitting on the ground which was eerily illuminated by the bursting strobe lights.