Positively Perry: Tyler Perry Stays In His Comfort Zone For Meet the Browns 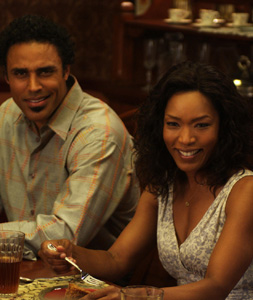 There’s a familiar thread that runs through most of Tyler Perry’s movies. It’s not his reliance on stereotypes, his focus on familial strife or the recurring indomitable Southern matriarch Madea. Rather it’s his repetitive portrayal of the strong black woman who always overcomes odds despite discord.

“I was raised by a single mother, and she took me everywhere with her. By the time I grew up I knew everything about Lane Bryant,” jokes the writer, actor and director.

Perry’s first feature flick, Diary of a Mad Black Woman, told the story of a cheating spouse from the wife’s perspective. Madea’s Family Reunion, his follow-up, continued the pattern with two half-sisters battling issues of abuse and betrayal with the men in their lives.

His latest, Meet the Browns, tells a similar story about Brenda (Angela Bassett), a struggling single mother in inner city Chicago whose life changes when she returns home to Georgia for the funeral of a father she never knew. There, she meets her father’s fun-loving Southern clan, the Browns, an eclectic and eccentric bunch. It’s also there, in Georgia, where Brenda finds romance with Harry (Rick Fox), a former basketball professional who develops a paternal relationship with her eldest son, Michael (Lance Goss).

“I wanted to show how something very positive can come of a negative situation,” says Perry. “I want my films to be relevant to people’s lives and give them hope, so it’s important to deal with subjects like single parenthood and poverty, but at the same time point the way forward through laughter, love and faith.”