The Grand: Zak Penn Tries His Hand At Poker 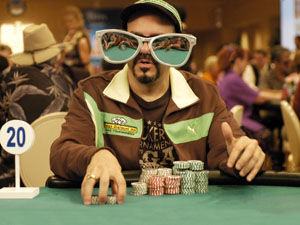 Although he’s known primarily for his screenplays, Zak Penn’s (X-Men: The Last Stand, Fantastic Four) latest offering is an improvisational, script-free romp through the world of professional poker.

Cheryl Hines plays one of the contestants in the movie and is also a real life poker fan.

“Sometimes I play with – I feel like I’m name-dropping – but I play with Teri Hatcher, Ellen DeGeneres and Portia de Rossi, Camryn Manheim and some regular gals,” admits Hines.

“I read the outline so I knew it was an improvised comedy about poker, and I had to do it,” she tells.

“Improvisation is an inherent part of the acting process and on some levels it is the writing process,” Penn points out. “Every word of a screenplay is, at some point, a mental improvisation.”

When asked what compelled him to stray from the strictly scripted format, Pen explains, “I think part of it might be my own attempt to escape from the strict confines of the big budget, tent-pole movies that I tend to write. The X-Men movies require a tremendous amount of specificity and a rigorous approach to story structure. There is no room for ambiguity.”

The improvisational nature of the film is so important that the film’s outcome depends on the flip of the cards. Any character could’ve won based on their hand.

“It was shot with 10 cameras in front of a live audience, and [the actors] all kind of lost themselves in their characters,” says Penn. “The fact that they genuinely didn’t know what was coming next and that they were really playing to win elevated [it] above a typical improvisation.”