Bedroom Walls: Flying by the Seat of Their Pants 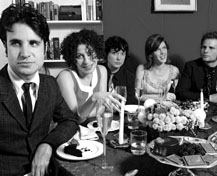 The whimsical effect of Bedroom Walls’ music seems to float all on its own. Delicately crafted layers from the fluid interplay between guitar, bass, keyboard and drums are complemented by the orchestral tones of the violin sequences and the occasional clarinet, flute, trumpet, and … piano played by a friend’s behind.

Yes, you read correctly. As rare as it may seem for an indie-pop band to add a "Buns of Steel" workout segment to an instrument, let alone a song, guitarist-vocalist Adam Goldman and his troupe couldn’t resist but to nurture this strange sprout of their creative process.

"There’s a chaotic buildup, and we decided on some really bad piano playing," explains Goldman. "There’s nothing more unschooled than playing the piano with your ass. We’re really just flying by the seat of our pants."

Bun puns aside, you can find the aforementioned bottoms-up track as well as other masterpieces on their upcoming second release, All Good Dreamers Pass This Way. It will be released on Goldman’s homemade label, Giant Pets, a label he created to put out the first EP, I Saw You Coming Back to Me, which received high acclaim by KCRW deejay Nic Harcourt. In fact, their album found a spot at No. 9 on KCRW’s most played album chart last October, squeezed between the likes of David Bowie and Belle and Sebastian.

Goldman is quick to credit good friends ("We’re lucky to have talented friends who work for cheap. In other words, they work for tacos …") and experienced producers Rafter Roberts (Pinback, Black Heart Procession, The Album Leaf) and Joe Thittarelli (Journey, U2, American Music Club), both of whom are currently recording in the studio with Bedroom Walls.

Goldman is also joined by a more recent cast of players: Kris Canning on bass, Donna Coppola on keyboard, guitarist Sean Hoffman, Vanessa Koffman on drums, and Aurisha Smolarski elegantly on the violin.

Just when you’re about to leave that horrible past behind you, the Walls’ self-proclaimed brand of music called "Romanticore" will sweep you into a reminiscent state of self-reflection, a retrospective tap-on-the-shoulder and kick-in-the-ass, if you will. Sort of like emo for adults.

Goldman explains: "Emo is about that sad boy rage and angst. Romanticore is like the next stage, where you resign to the situation."

The theme of maturity is apparent, and the aftertaste of humor is subtle. There is a certain focus on awkward situations, yet also an appreciation for them. This often gets confused with irony, but Goldman begs to differ.

"I think we can have a dark sense of humor, [but that] doesn’t mean we have to be ironic. What takes a sad moment and makes it romantic is that strange warmth, that nostalgia you have for painful awkward moments. It’s easier to do that if you can smile about something stupid you did. I think that’s a kind of romanticism as well."

Bedroom Walls live simply and effortlessly in those tiny moments of triumph, dwelling in their own current and future success. No butts about it.