Under the Same Moon (La Misma Luna): Shows Us the Astronomic Heights of Love 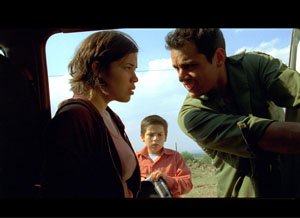 In an era fraught with debate over immigration, Under the Same Moon (La Misma Luna) may seem like just another film about immigrants – instead, it is a tender love story about the enduring bond between Rosario (Kate del Castillo) and her nine-year-old son Carlitos (Adrián Alonso), who have been separated for four years by miles of border fencing.

Carlitos has been living with his grandmother (Angelina Peláez) in Mexico while Rosario has been living illegally in Los Angeles trying to earn a better living for them. In order to cope with their prolonged separation, Rosario tells Carlitos to remember that no matter how far apart they are, they are always living beneath the same moon.

“Rosario is a person who lives through everything, all the pain, frustration, courage and humiliation immigrants go through so they can send money to their children,” says del Castillo. “When you leave a child behind like this, it creates an empty space in you forever.”

Although the immigrant experience is an undercurrent in the film, it is the enduring love and sacrifice for family that makes the story universally appealing.

Screenwriter Ligiah Villalobos explains, “This is a story of a young boy who was abandoned by his parents for the purpose of giving him a better future. You don’t need to be Mexican or an illegal immigrant to be able to relate to this film.”

The pain of being separated from family is a cross-cultural emotion, which is what drew Mexican director Patricia Riggen to the project.

“Even though this movie is very Mexican … the relationship between a mother and son has no nationality,” she says.

An immigrant herself, but with a different experience than most Mexican immigrants in the United States, she was attracted to the script after seeing the hardships her countrymen were facing stateside. Both Riggen and Villalobos wanted to show that immigrants are not just a political issue – they are good, hardworking people going through emotionally painful experiences just to be here.

“The only reason they do it is [for] love. Love for parents, children, family, brothers and sisters, to be able to pay school fees. This for me is something very beautiful,” Riggen reflects.

With the sudden death of his grandmother, Carlitos unflinchingly takes on the task of crossing the border on his own and reuniting with his mother. Enlisting the help of Marta (America Ferrera of “Ugly Betty”) and David (Jesse Garcia) – a pair of Mexican-American siblings struggling to earn tuition money by sneaking Mexican children across the border – Carlitos makes it across, but not to his intended destination.

Though the brilliant Alonso and del Castillo head the stellar Latino cast, Eugenio Derbez, one of the most successful comedians in Latin America, rounds out the lineup as Enrique, a hardened migrant worker that Carlitos meets on his journey.

In a nod to classic Mexican cinema, music figured greatly into the film, sometimes acting as a plot device. World-renowned norteño band, Los Tigres del Norte, also make a cameo appearance as a humble band of traveling musicians who give Enrique and Carlitos a ride.

At once an entertaining adventure and a bittersweet love story, it would be simplistic to call Under the Same Moon an immigrant story. Just as a famous Austrian once revealed that sometimes a cigar is just a cigar; likewise, sometimes a good movie is just a good movie – not a political statement or a public service announcement.

Under the Same Moon releases in select theaters March 19.