Planet B-Boy: Breakdancing with the Stars 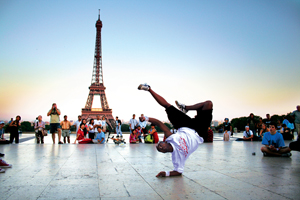 Nowadays, it seems like we only see breakdancing at high school dances – and oftentimes, the guys only try to do it to impress the ladies. But there is much more to breakdancing (originally known as b-boying) than generally perceived: the dance form also contains depth and ideology.

“Unlike other dances where dancers learn by steps,” states director Benson Lee, “b-boying starts with a foundation and you develop your own identity and character.”

This freedom is what inspired the University of Hawaii alum to film Planet B-Boy, a documentary exploring the world behind b-boying.

“I wasn’t from an area where others did it, though, so I was kind of a ‘closet breaker,’” jokes Lee.

The documentary follows several b-boy crews (Gamblerz and Last for One from Korea, Ichigeki from Japan, Knucklehead Zoo from USA and Phase-T from France) as they make their way to the biggest b-boy competition in the world: Battle of the Year in Germany.

B-boy crews have often been viewed as “gangsters,” but Lee is quick to point out that these are just stereotypes.

“These kids don’t do drugs,” asserts Lee. “And, they have families that they care about. [Furthermore,] these guys are like warriors. They have a complete freedom to understand themselves, and they’re dancing to prove and express themselves.”

Not to mention that they look wicked cool doing it. From “power moves” to more technically difficult moves, these dancers manage to convey their personalities in a very stylized and jaw-dropping way.

Athleticism is not the only thing that counts when it comes to b-boying (and a lot of strength is needed to perform some of the moves); a lot of skill is required, too. These dancers pour hours a day into practicing and polishing their craft.

“One day, I randomly wondered if people were still b-boying,” Lee recalls. “I looked it up online and was shocked to see that it was still around – in fact, it was more spread out and organized.”

Although exhibitions and choreographed performances are a part of b-boying, the aspect of the dance that most distinguishes it is the battle element. Crews “battle” with each other through dance – it is a time to fully express oneself through improvisation and emotion.

“Everything in life is a battle, and b-boying captures that,” muses Lee. “That’s the main reason why I think b-boying will come back … it’s going to explode again.”

And Lee should know – he’s done over six years of researching the history of b-boying. Right after he graduated, he went to Paris to try to get into the European film scene, but had a hard time finding a job there.

He moved to London, where he wrote Miss Monday, which went on to Sundance to win the Special Jury Prize for best actress. Following that film, he rediscovered b-boying and did extensive researching before starting the project in 2004.

Although the documentary only briefly looks at history, it’s meant to introduce the world of b-boying to the public. Lee is currently working on a feature film adaptation of Planet B-Boy; it will be a fictionalized story with a heavier focus on history.

Hopefully, these films will allow people to better understand the rich tradition that permeates the hip-hop culture.

Lee hopes that the documentary will strip off a few of the stereotypes surrounding b-boying and hip-hop culture in general.

“These kids are dedicated to dance and music,” explains Lee. “They’re true artists.”