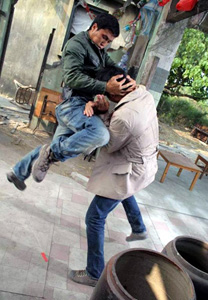 “Are you guys busting thieves or cops?” Detective Sergeant Ma Jun asks indignantly after being questioned by his superiors for using excessive force … yet again. This time, however, we find out that his martial arts bar brawl that opens the film with a mixture of Jujitsu, Muay Thai and classic Kung Fu moves was with his partner, Wilson, who has gone deep undercover to infiltrate a dangerous Vietnamese gang of three brothers causing havoc in Hong Kong.

Ma Jun and Wilson, played by Hong Kong martial arts stars Donnie Yen and Louis Koo, have their work cut out for them as they engage in some innovative and extremely well choreographed battles with the dangerous triad brothers. Although the pacing is a bit slow at times as the film compounds motivation upon motivation for the final come-uppance of the antagonists, the fight scenes make the classic action film's “in between” moments worth it.

Detective Sergeant Ma Jun finishes the film with the same tough-guy-on-crime attitude as in the beginning: “Have I ever busted the wrong guy? I’ll leave that to the judge. My job is to bust thieves.”

Flash Point is currently in select theaters and will be available on DVD April 22.