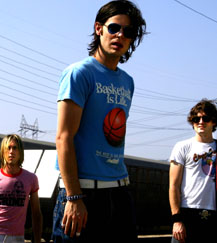 Is there anything wrong with the Silverlake music scene? To the passing visitor it may appear as though it’s the peak of underground artistry, the pool from which the next huge radio band will eventually be drawn and the pinnacle of fashion.

But to the veteran eyes of Dylan Callaghan, singer/guitarist for the L.A.-based rock band Shapes of Race Cars, Silverlake is a spawning ground for some of the most original music in Los Angeles, but it also has its share of problems.

"The thing lately that kills the scene is this kind of high school hipster mentality, where people want to be popular," an impassioned Callaghan reveals. "Anytime that gets involved in any kind of art … that’s the worst thing that can happen. It’s weird when the non-conformist movement is wearing a uniform."

Although originality may sometimes be hard to find in Silverlake, SRC sees this as the very reason to maintain the attributes that set them apart from the pack.

"It’s easy to put a band together that everyone in the club will go, ‘Oh, cool, they fit in, they look like they’re supposed to.’ But they’re not doing anything [original]."

The band also doesn’t rely on trendy haircuts or designer clothes to create an image, carrying sounds in their music described by Callaghan as "In Utero-era Nirvana, French-kissing the Cure." He talks about the defining characteristic he believes could improve the Silverlake music scene.

"Fresh" is a word that sums up the SRC sound, which is causing enough of a stir to make people stand up and take notice. In addition to airplay on Indie 103.1, their debut EP Apocalypse Hurts has been selling across the country as well as in places as far flung as Estonia, in Northern Europe. SRC has also worked with Brian Jerden, son of legendary producer Dave Jerden (Jane’s Addiction, Alice In Chains, The Rolling Stones), and due to some tenacious promotion, have received interested calls from RCA.

"People wonder if it matters to be on the radio, but apparently someone’s listening," Callaghan happily explains.

Shapes of Race Cars hope the attention will help the band achieve their biggest goal for the future: making a full-length album. The band is looking into both indie and major labels, although Callaghan expresses some apprehension at the thought of dealing with the majors.

"They terrify me, and they’re awful. They’re awful even when they’re nice to you."

And though he makes it clear that the indies are preferred to the majors, the most important thing to the band is to record with the same creative freedom that has defined their personality as a band.

"The priority is to make the record we want. It’s ready in terms of material, it’s honed down and we just want to tour and support it."

The future will certainly bring more success to SRC, and as for Silverlake, Callaghan offers a simple solution.

"We’re gonna take these [trendy, hipster types] and start a cult. They’re gonna want to be in a cult because they ultimately want to conform," Callaghan says with a laugh. "We’re gonna get them some running shoes and robes, and make them drink the lemonade. [Then] it’s going to be like Eden in Silverlake for the rest of us."