NCAA Brackets: How to Fill Them In 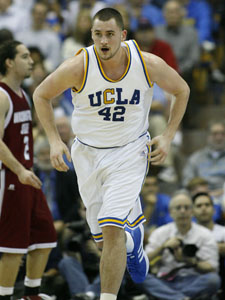 The bubbles have burst, the brackets have been released and now the 65-team tournament is set for what is shaping up to be a very exciting march to madness. With UCLA comfortably in the driver’s seat of the West bracket it would be easy to put them down as your champion, pick the favorites in most games and call it a day. But in an age where parity is the word of the day and teams like Butler can be in the national championship discussion, the brackets have become increasingly more difficult to figure out.

Now this doesn’t count for UCLA fans who will likely pencil their team into the final game, but those who root for strong programs in down years – Kentucky, Arizona and Indiana – need to know when to say when. Blind loyalty is one thing that will quickly kill any bracket, even if it kills you to pick against your team.

USC fans need to also be on alert as they play a strong Kansas State team with Michael Beasley, and then have a possible match up with Big 10 champion Wisconsin after that. At the end of the day, your perception of reality doesn’t matter if your team is knocked out in the first two rounds.

Don’t Be a Hero

Unless you were actually a student at George Mason two years ago, you probably didn’t have them going all the way to the Final Four. Making big calls on small and mid-major teams will probably impress your friends if they actually work, but you’re far worse off killing good teams with dumb choices.

I know hindsight is 20/20, but make smart moves and take chances where you actually think chances will pay off. There is no glory in picking chalk, so low seeds and mid-major teams that likely could make a run this year are Davidson, Arizona, Butler and Villanova.

When all Else Fails, Check the Stats

There are three important stats when it comes to deciding which teams are better in hard games. The first is rebounds, especially on the offensive side. Rebounds mean more possessions, and more possessions means more points.

Next is three-point efficiency. The three point line in college is way too close, and teams that can hit threes at will like Kansas and Texas are always going to make big runs in big games. Also watch out for a guy like A.J. Graves at Butler who can be a three-point machine when the pressure is on.

Finally, blocks. If a team averages a lot of blocks, they have the size to stop smaller teams inside and force them to make rash decisions, creating turnovers. Stanford fields two seven-foot twins, Georgetown is always strong, Kansas is quick to the ball and USC plays a lot bigger then they should.

Finally, here are some X-factors to consider when filling out your bracket:

1) Never pick a five to win it all. They are the most often high seed to be upset in the first round and have never won the tournament.

2) Beware the whitewash. Good teams that successfully field five white guys in their first eight never go to the Final Four. With that said, watch out for Wisconsin and Gonzaga.

3) Make sure at least three of your Final Four have a big name player: Rose, Rush, Love, Hibbert and Hansborough.

4) Watch the freshmen on your teams. Can they handle the stress of being put on the free-throw line with a one-point lead and 20 seconds to go?