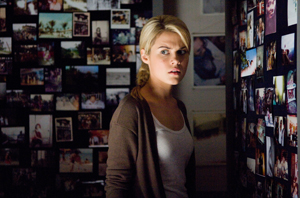 The makers of The Grudge are about to unleash the latest wasabi beatdown on American moviegoers with the fright-fest Shutter. The film stars Joshua Jackson (“Dawson’s Creek”) as a fashion photographer named Ben and Rachael Taylor (Transformers) as his new wife, Jane. The two have traveled to Tokyo to mix business with pleasure; he will work on a photo shoot and, on the off hours, they’ll enjoy this vibrant city together.

There is a caveat, however, when accident happens one night. Ben and Jane have a fender bender and strike a girl while journeying along a road near the mountains.

The girl mysteriously disappears – or so they think. Soon, her image begins to manifest itself in the pictures that Ben has taken. But who is this mysterious stranger, really?

Taylor relishes her role as the young wife in Shutter. She enjoyed the fact that the film gave her the opportunity to play what she calls a “proactive” character.

“What I liked about Jane is, she goes on a very strong journey of her own accord to get to the bottom of [everything],” Taylor explains.

Hollywood is notorious for exploiting physical traits as opposed to gutsy performances from women with lots of talent, so it was also paramount for Taylor not to play the clueless blushing bride.

“I have no intentions of playing a helpless female that gets hacked into pieces,” she says.

Since most of the scarier moments are seen through Jane’s eyes, it was clear to the filmmakers that they would need to cast a performer that could really drive home the emotional intensity of the action that occurs within the plot. Taylor demonstrated to the masses that she’s more than just a pretty face when she lent a classy, albeit sexy, intelligence to 2007’s blockbuster, Transformers.

While she’s obviously a subscriber to the necessity of a good part, how much does she rely on the possibility that what Jane goes through could really happen to someone in real life?

“I am a believer in the existence of certain kinds of energies,” admits Taylor. “And I like what Shutter has to say about energy and emotion, or emotion being able to make itself heard. That makes sense to me – if something is really strong, it will find a way to materialize or send a message.”

If that’s true, then there was certainly a lot of energy during the three-months of the production.

Taylor admits to a wealth of strange goings-on during filming. Many scenes were shot on location at an abandoned hospital or in the mountains in Japan. There were instances of otherworldly events that might permeate such locales.

“There was some construction going on outside the stages,” she recalls. “We noticed that whenever a crane would move, we noticed that some eerie music from The Omen would play. That’s gotta mean something.”

Luckily for the 23-year-old actress, she was well protected. Having made friends with co-star Jackson meant always having a buddy around during the rough spots.

Her co-star also garnered much respect from her, as he was able to command the Japanese language with much greater ease than she. You see, for this Tasmanian actress, she could relate to the quiet detachment that Scarlett Johansson’s character, Charlotte, felt in a certain film with a few similar themes.

“I had some serious Lost in Translation moments while filming Shutter,” she admits. “I think it’s similar to what Jane goes through in the film. She’s very much out of her depth and desperately trying to cope with a culture she’s unfamiliar with.”

“Jane is a stranger in a strange land that doesn’t know how to find her place,” says Jackson. “Ben is supposed to be comfortable enough in this world that he’s able to navigate it with a fair amount of ease.”

Aside from male and female lead forming a great working relationship, director Masayuki Ochiai also commanded a wealth of good favor on the set. His lead actors were blown away by the efficient nature in which Shutter was handled on a daily basis.

“Ochiai has the ability to set a mood and create tension throughout the story,” explains Jackson. “As actors, we worked with him to create the scary moments and have the audience join us for the ride.”

Taylor agrees: “Ochiai has a really good eye for what’s authentically scary and that translates to all audiences.”