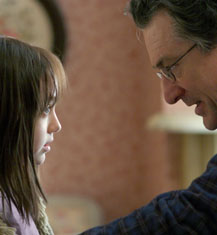 It’s common knowledge in Hollywood that Oscar-caliber films own the months of November and December, while movies with plenty of spills, chills and edge-of-your-seat thrills dominate January through early spring. And the rollover this year is no exception.

While the latter part of 2004 featured the openings of films like Marc Forster’s Finding Neverland, Clint Eastwood’s Million Dollar Baby and Martin Scorsese’s The Aviator, the new year – so far, at least – has seen a handful of scary movies hit multiplexes from coast to coast.

There’s the Michael Keaton-headlined White Noise, which hit theaters Jan. 7; Alone in the Dark, which opens this week and costars Christian Slater and Tara Reid; and Hide and Seek, from director John Polson, which releases Jan. 28. Unlike Noise and Dark, though, Hide and Seek is truly in a class by itself.

Starring Robert De Niro, Elisabeth Shue and 9-year-old acting prodigy Dakota Fanning, Hide and Seek is a solid testament to the fact that, just like in years past, this is the start of a scary movie season in Hollywood.

In the film, penned by first-time screenwriter Ari Schlossberg, a detached widower (De Niro) moves his young daughter, Emily (Fanning), to upstate New York after the sudden death of his wife and his daughter’s mother (Amy Irving).

While Emily is pretty well-adjusted while her mom is still alive, the youngster takes a turn toward creepiness after she and her dad, David, move into their new home. She begins playing games with Charlie whom her dad believes to be his daughter’s new imaginary friend – and a healthy response to her mom’s sudden death. When people start dying, however, David begins to question whether or not Charlie is pretend or … gulp! … actually real.

"This role is like nothing I’ve done before," says Fanning. "First of all, I look a lot different. But that’s only the beginning. Emily is definitely scared and in some sort of trouble but she keeps you guessing about who – or what – is really causing these scary things to happen."

According to director John Polson – who most recently helmed Swimfan, a Fatal Attraction-esque thriller for the teenage set, starring Jesse Bradford and Erika Christensen – the creepy vibes and nonstop thrills achieved throughout Hide and Seek are not just a testament to De Niro, Fanning and the rest of the supporting cast, but also to good, old-fashioned scare tactics like manipulated design, lighting, camera movement, sound and music.

"We use these things, as well as the wonderful understated work from Bob and Dakota, to create a quiet ‘psychological’ creepiness for the first two-thirds of the film, to keep audiences on edge," says Polson. "During our last act, the action and scares never stop."

Before the last act of the film, though – when the scares really start to pile up – David attempts to find help for his daughter with a concerned NYC-based psychologist named Katherine (played by X-Men’s Famke Janssen). Aside from forming both a maternal and professional relationship with Emily, Katherine visits Emily and David when she learns about the strange occurrences taking place in their new upstate home.

"Katherine is a skilled psychologist who is dedicated to helping Emily and David," says Janssen. "Katherine knows that the simple game that Emily is playing and her so-called imaginary friend Charlie represent much more than they seem. But the words ‘Hide and Seek’ resonate for all the characters, not just Emily, reflecting who they are and what they’re going through."

"At first it seems a good thing that Emily has an imaginary friend," adds Fanning. "Then it gets bad … and then it gets worse."

Despite all the complexities to which the film plays host, Polson breaks down Hide and Seek, letting people know what he hopes they’ll get out of it.

"We tried to make a thriller that doesn’t talk down to the audience," he says. "I want people to have lots of fun with the movie, but also know that they’ve experienced a moving, complex relationship between a father and daughter."

With De Niro, Fanning, Janssen and a creepy imaginary friend leading the way, it looks as though scary movie season in Hollywood has officially begun!

ALONE IN THE DARK

In this psychologically disturbing, paranormal thriller based on the popular video game, Christian Slater stars as detective Edward Carnby who investigates the supernatural and unexplained. The stakes are raised while he’s looking into the death of a friend and stumbles onto clues which lead him to "Shadow Island" where, among other things, he learns that a group of demons are planning to come back to life and take over the world.

In this Sam Raimi-produced scarefest, a young man (Barry Watson of television’s ‘7th Heaven’) traumatized by horrifying events that took place in his childhood bedroom, is forced to return home years later and face what could either be a figment of his imagination or – even worse – an actual monstrous entity.

In this edge-of-the-world adventure, a rescue team headed by the likes of Morris Chestnut, Cole Hauser and Eddie Cibrian discover a new species, and are then hunted down by the creatures when their sole escape route out of a deep cave is suddenly cut off.

In the sequel to its wildly successful predecessor, The Ring 2 picks up about six months after the original left off as a frazzled Rachel (Naomi Watts) moves her son (David Dorfman) from Seattle to a quiet coastal town in Oregon to recover from her experiences with the creepy Samara and that all-too-familiar unmarked videotape. However, as this is The Ring 2, one can guess that the horrors in Rachel’s life are far from over.

In this reinterpretation of the 1979 original, a family’s new dream home becomes one big nightmare after the events which occurred in the house a year before – when a young man, claiming he was hearing "voices," slaughtered his entire family while they slept – come back to terrorize the new tenants.