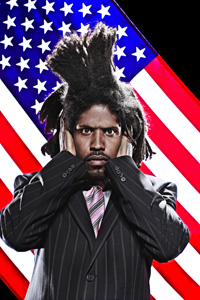 What’s the best part about the Paid Dues Independent Hip Hop Festival? “It’s mine,” says Murs, who will release Murs for President later this year. As the founder of the festival, Murs loves that young people (under 21+) get a chance to see their first rap show ever.

“It’s like popping their cherry,” he grins. “Hopefully, it’s changing their young lives.”

Restaurant: M Café (7119 Melrose Ave., Los Angeles). It’s expensive and bourgie, but the people are nice. I’m a vegan so I don’t have many choices.

Favorite thing about L.A.: “It’s home. You can’t beat it. On clear days it’s the greatest city in the world.”