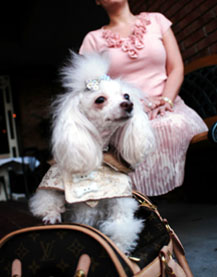 Andrea Kafure brushes her dark hair, applies makeup, selects her outfit and slips on trendy pink-trimmed high heels before she leaves her mother’s house every day.

But without her toy Pomeranian, Sven, tucked into her bag or under her arm, the 18-year-old Hollywood, Fla., woman just doesn’t feel dressed.

Inspired by celebrities like Paris Hilton and Hilary Duff, dog owners are hitting the town with their pint-size pooches in tow – poking from the pockets of chic outfits, or hanging out in $1,300 Louis Vuitton dog totes.

"It’s a bit of escapism," said Steven Cohen, who owns Dogbar, a pet boutique and bakery with outlets in Miami Beach and Coral Gables, Fla.

"We live in a violent, crazy world, and people are drawn to anything that insulates yourself against all that and lets you create your own little world."

Cohen’s Miami Beach store carries everything for the canine fashionista, from $90 hand-knit sweaters to elaborate rhinestone and pony hair accented collars that sell for $100 and up.

Hilton herself came to the store to outfit her Chihuahua, Tinkerbell, before last August’s "MTV Video Music Awards."

The blond glamazon whose life appears to be one long photo op rarely poses without Tinkerbell. The exposure has fueled growing sales for teacup breeds, which weigh fewer than 4 pounds fully grown.

Involuntary sighs of "awww" and squeals of delight provide a constant soundtrack at Teacups Puppies and Boutique on Stirling Road in Hollywood, Fla. The shop sells tiny Yorkies, Chihuahuas, Maltese, at $995 and up, piles of dresses, carriers and jewelry to adorn them.

But tiny dogs are pets, not accessories, and they live 13 to 15 years, said owner Eleonora Bonfini.

She frequently refuses to sell puppies to people who seek teacups as purse adornments, not longtime companions.

"They are like premature babies," said Bonfini, who has recently sold teacup puppies to teen-pop singer Hilary Duff and actress Mandy Moore. "These little lives require a lot of attention. Unless you get that, you can’t have one."

Lucy has her own armoire, which holds hairbows, dresses and sweaters with purses to match. Lucy gets regular pedicures, and sometimes has her hair dyed pink, though Siegel says she’s in a white phase right now.

Siegel viewed herself as a big-dog type of person until she met Lucy three years ago.

"I just saw her and fell in love," she said.

Many who own – and shop for – couture canines compare the protective love they feel for their dogs to the bond between mother and child.

"A lot of people don’t have children any more, either their kids grew up or they never had kids," said Pliner, who lives on Star Island off Miami Beach. "The dog is a substitute for the child, and so they dress them up."

Preferably, said Pliner, they dress their dogs in the Friends of Babydoll line, which offers leashes and collars to match Pliner shoes.

"My babies are my life," said Jeanne Petrillo during a recent stop at Pets are People Too, a pet salon and boutique in Pembroke Pines, Fla.

Petrillo has seven tiny dogs, and recently spent $600 at the store for ultrasuede vests and Svarovski crystal necklaces for her newest dogs, Abigail and Micah.

But unlike most babies, Siegal said her Lucy has the good fashion sense not to whiz in what Siegal calls her house, a leather-trimmed Louis Vuitton carrier:

"If she has to go, she’ll bark and I’ll take her out," Siegal said.

"She would rather die than go in her house."