Alone at 3am: City Out of Luck
(Tiberius) 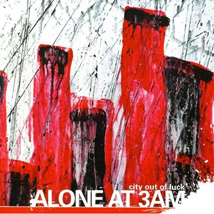 Alone at 3AM attempt to mine the button-down, corporate rock sound that the Foo Fighters occasionally break out of to write a decent song, but they’re still missing something: the lack of passion in lead singer Max Fender’s vocals, for one. The lyrical content also leaves something to be desired since many songs rely on a few interesting sentences, repeated ad nauseam to carry the entire message of the song.

I wasn’t sure if they were supposed to be a retro band, but they sounded like they would have been more at home in the late ’90s. With that said, there were a few things I thought hinted at a brighter future for this Cincinnati band.

In the song “Whiskey and Gin,” the band tried to play around with a guitar sound somehow evocative of Ireland without sounding like a Flogging Molly mimic. Kudos. But they’ve still got plenty to work on.

City Out of Luck is currently available.