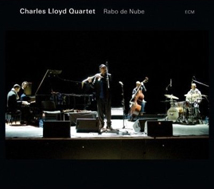 Tenor saxist Charles Lloyd has a peerless musical personality that melds avant-garde elements with lyrical, traditional jazz that emphasizes composition and group interplay over elevated solo strategies. That’s not to say he isn’t one of the great saxophonists. He is.

Live album Rabo de Nube is a testament to Lloyd’s ability to attune his music to the communication of his quartet. Lloyd, who also plays tenor flute and taragato, is joined by pianist Jason Moran, bassist Reuben Rogers and drummer Eric Harland on seven tracks that demonstrate that Lloyd’s transcendental style remains unchanged from his heyday in the ’60s, when he successfully brought jazz to rock audiences.