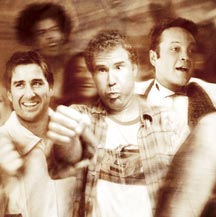 Will Ferrell's comedy on "Saturday Night Live" almost came off like those of an improvisational frat boy. Just like a blowhard with a turned-backwards baseball cap will chug from the keg and spout rants of glorious lucidity, Ferrell can turn his characterizations up to the level of sheer brilliance when he really gets drunk from the energy of his audience.

On the afternoon of a press conference for his new film Old School, DreamWorks really needs Ferrell to use this gift to give the hard sell. They are dealing with trying to fuse the audiences of two completely different age demographics (the thirty-something and the college kid) into one boffo opening weekend at the box office.

Ferrell, Owen Wilson and Vince Vaughn play three guys in their mid-30s that start a fraternity when their lives fall short of their expectations. Do they feel reverting to the college lives they never had will recharge their batteries to make the rest of life's important decisions? No, not really, because first they want to party!

The beginning of this afternoon press conference starts with Ferrell going right into a just-swigged-from-the-bottle of improv mode. He treats the very professional-looking conference room as a basis for Poly-Sci analysis, U.N.-style if you will. "So far we have not been able to detect any chemical, biological or nuclear weapons," Ferrell deadpans after he sits at his microphone. "We're gonna need another two weeks," chimes in Wilson, which finally elicits the expected laughter from the college journalists at the front of the room.

"We've only gotten to the first two floors, and there are 20 floors in the hotel, so we're gonna need more time," Ferrell ends the mini skit. Wild bits of genius such as these make up director Todd Phillips' follow-up to Road Trip, which is also his second collaboration with Mr. Animal House himself, executive producer Ivan Reitman. Reitman knows his way around a fraternity comedy, and the maturity of the film’s comic material clearly shows that his role in the film is not merely a financial one. He is also giving some sage advice on how fart jokes do not only a college comedy make.

Ferrell has to strip down to his skivvies for a romp around campus after his straight-laced, whipped family man reverts into his old booze-swilling college persona, Frank the Tank. "I know Will flew in his acting coach from Kentucky, Jim Beam, that night," says Wilson of Ferrell's motivation for the scene. "He's a good guy. He's a naturalist, he's method," concurs Ferrell.

down and run around a college campus, the answer neither shakes nor stirs him. "There's not enough booze in this hotel, honey," he chides.

When Ferrell talks about his own crazy college life at USC, he comes across as someone who was always ON, ready to let his comic animal run wild. "I had a work study job in the Humanities A/V department. I checked out tapes and equipment, so no one really ever kept track of where I was. What I would do on occasion is find out in what classes some of my friends were in and then dress up as a janitor and just show up in the middle of class," says Ferrell. "There was one specific class I would do it to called Thematic Option, and the teacher would see me on campus and encourage me to come into his class every few weeks. I would just hang out in the hall by his class with a power drill and mess with people."

"Oh, and I killed one person," says Ferrell as an exclamation point.

It seems that he’s always had a gift for finding humor in a situation and milking it for all its worth. Then going one further. This is why his performance in Old School is so vital. He plays the class clown against straight men Wilson and Vaughn in order to nuance the film beyond banality. Thanks goodness Ferrell had some previous training before riffing with Vaughn, with whom he had previously done a sketch on "SNL." They played two hardcore cat toy salesmen, a sketch Ferrell remembers as "being one of my favorites that season." And then, of course, comes Ferrell's expected push over the cliff. "And also probably one of the greatest sketches of my life."