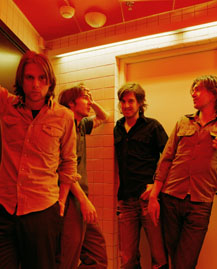 Almost a decade ago, France set out to do some crafty cultural cleansing. Among other regulations implemented by the government to protect the nation’s culture from the invasion of "les Anglo-Saxon," radio broadcasters were required by law to play a minimum of 40 percent of their music in French.

Today, that means that French bands like Air, Daft Punk and Phoenix (all of whom sing in English) get little airplay. But to them, that’s a matter of little consequence. It’s no wonder some of the most popular French words this side of the Atlantic are "ennui" and "blasé."

"We’re considered strangers in our own country," says Thomas Mars, lead singer of Phoenix. Like their debut, Phoenix’s latest release, Alphabetical, is sung entirely in English. "We don’t get any radio play [in France]. [French people] see us as the black sheep. They think we reject French culture."

Mars is certain that his countrymen believe that French bands who choose to sing in English are destroying their nation’s tradition. "Us and Air, Daft Punk and Tahiti 80 really represent the new wave of French culture," Mars declares.

In the Parisian suburb of Versailles, where Mars and his bandmates – bassist Deck d’Arcy and guitarists Christian Mazzalai and Laurent Brancowitz – grew up, there’s not much else to do than become a music junkie. The foursome met at school when they were only 10, and together they fell in love with music.

"In Versailles and in Paris, people were really stuck into one particular style," says Mars. "But we listened to anything; we didn’t care about trends."

Later, this love of music and all its genres led to their debut album, United, where Phoenix crafted a mélange of flavors drawn from ’70s rock, electronica, folk and heavy punk references.

On Alphabetical, Phoenix tightened their musical whimsy while mixing hip-hop beats, folksy guitar sounds and funky bass lines. Lyrical ambiguity is a mainstay of Phoenix’s songs, as is the juxtaposition of bittersweet verses with jangley guitars and catchy percussions.

Mars admits that singing in his native language was never really considered. By the time he and his bandmates fell in love with the sexually charged chansons of singer-provocateur Serge Gainsbourg, Phoenix’s "musical brain," as Mars puts it, was already formed.

As it turns out, that has its advantages. Singing in English has allowed Phoenix distance from the way the French music industry works. "If we are not successful in France, our album is out somewhere else," he says with a hint of that oh-so-French nonchalance.

Indeed, when United came out it was immediately praised by the English-speaking world and appreciated by the influential ears of people like Roman and Sofia Coppola (who went on to direct Phoenix’s videos and include their songs in movies like Lost in Translation). Despite a total lack of support from French press and audiences, Phoenix got to make their second album. "We take the fact that in France we are less successful than in other countries as a gift."

Perhaps France’s loss is our gain. We may not posses that je ne sais quoi of the French, but we do recognize good music when we hear it.