BCAM at LACMA: Part II: Through the Next Earthquake @ the Broad Contemporary Art Museum 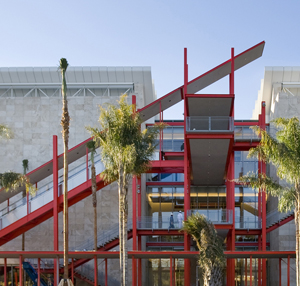 It’s the Getty gone punk. Travertine, the imported Italian stone that makes up every non-steel and glass surface of J. Paul’s museum wraps the outside of BCAM before peaking with a mohawk above the third floor, alluding to the contemporariness of the objets d’art inside.

Alright, a mohawk isn’t exactly contemporary anymore, but it’s more modern than the flattop 1950s hairdo of the surrounding LACMA buildings. Against the sun, the outline is a square with a shark-fin roof – and when it comes to architecture, the silhouette is of the utmost importance if the structure is to become an icon. Disney Concert Hall, the Empire State Building, the Chrysler Building, the Eiffel Tower – all are as recognizable in shadow as they are in sunlight.

Designed by Renzo Piano (pee-a-no – don’t make the same mistake I did,) BCAM’s exterior is wrapped in what’s affectionately been called “the spider,” a series of “Renzo Red” tubes that stretch their fingers around the building, again reminding drivers stuck vanity plate-to-vanity plate on Wilshire that there’s something special inside, the steel reminiscent of a bow that a trip up the exterior escalators – providing incomparable views of Hollywood Hills – slowly unwraps until you enter the gift inside.

Sculpture, which I argue is a form of miniature architecture, is just as important to this new space. Before hopping on an escalator, a hundred vintage streetlamps culled from various L.A. neighborhoods (The Thomas Guide lost count somewhere in the last decade) sprout up in front of the entrance pavilion, artist Chris Burden’s monument to preservation and illumination. It reinforces BCAM, reminding one that sometimes we need judge a book by its cover, especially with one as ornate and telling as this.