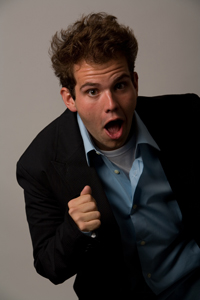 From the start of our interview, it was obvious that this young, newly signed-on talk show host was going to be one-of-a-kind.

A very energetic Jake Sasseville greets me over the phone. “You’re going to have to excuse me if I sound like I’m running out of breath,” he huffs, “I’m jumping on a trampoline.”

At the tender age of 22, Sasseville is the creator and host of “The Edge with Jake Sasseville,” an unconventional, raw, in-your-face late night talk show that over steps the boundaries of many of today’s conventional programs. Born and raised in Lewiston, Maine, Sasseville defied the odds of living in a small town to become a superstar like the comedians he admires.

“Conan O’Brien, David Letterman and Robin Williams were my inspirations,” he says.

Aiming to become larger than life while in his early 20s, he knew he would have to work hard – harder than his competition.

“I believe if you’re positive, real and honest, you’re going to make it,” assures Sasseville, who worked as a sandwich artist at Subway in order to make his dreams come true. “I am a 22 year old that isn’t going to stop at anything.”

Sasseville first brought “The Edge” to a local cable-access channel in his hometown in Maine. From that point on “The Edge” began to develop public recognition, mostly from his peers, whom he calls “Generation Y:” a generation of adolescents who are involved in the world virtually by using the Internet.

“The way we consume media now is different,” says Sasseville. “We’re involved online and very virtual … [The show’s sponsors] saw a show that was going to gear towards this generation.”

Major companies, like Overstock.com, Red Bull, Bed Head, Dunkin’ Donuts and Ford Motor Company helped expand “The Edge” on-air to various markets across the United States. After building a large cult following through YouTube and various blogs, the young entrepreneur was able to take late night TV to another level.

As an 18-year old, Sasseville moved from his hometown in Maine to New York to expand his talents and take America by storm.

“You have to have passion,” declares Sasseville. “Ninety percent of the show was created from passion, and 10 percent is fact.”

Unlike the norm of other talk shows, “The Edge” chooses to create a guerrilla style of filming. Throughout the show’s debut, Sasseville walked around the streets of New York interviewing his guests in sweet treat locations like Dunkin’ Donuts.

In the premiere episode, Sasseville sat down and chatted it up with musician Wyclef Jean, comedian Jim Norton, Katrina Bowden (“30 Rock”) and Rainn Wilson (“The Office”). The weekly half-hour talk show, which made its debut Feb. 14, following “Jimmy Kimmel Live!,” is set to air 13 episodes for its first season.

In addition to his small screen aspirations, Sasseville launched the Xander Foundation, named after his brother who died of leukemia. After seeing homeless children living in insufferable settings during a trip to Africa in 2006, Sasseville wanted to make a change. Since its inception, the Xander Foundation has made plans to build a free school in Malawi and delivered 1,000 notebooks and recycled shoes to refugee camp children.

With his TV show in full gear, the rising star is also pursuing degrees in Communication Arts and Business Management at Marymount Manhattan College.

As a young entrepreneur, Sasseville has these words of advice for his peers: “Create a brand, be different and just do it! … Think positive and people will respond.”

“The Edge with Jake Sasseville” airs Friday nights at 2 a.m. on Channel 13.

Interviews
James Bond producer: 007 ‘can be of any color’ but never a woman
247 views