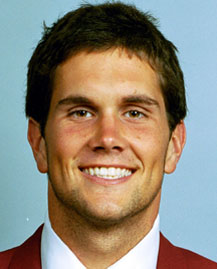 Millions of dollars made financial sense to Matt Leinart, but he couldn’t put a price on playing one more season at the University of Southern California.

"I’m not stupid," the Heisman Trophy-winning quarterback said Friday. "I realize what could’ve been.

"But it’s not what’s important to me now."

Leinart, 21, spent the 10 days since he led USC to victory in the Orange Bowl and its second consecutive national championship determining what truly was important.

Money? It wouldn’t hurt, but he gets by on the monthly stipend of $950 provided through his scholarship.

Another Heisman Trophy? Not really, since he already is one of only 69 winners of the award that goes annually to college football’s best player. He didn’t need to reach a more elite level than that.

Through constant discussions with family, friends and countless others who were willing to share their opinions, he realized what mattered most to him. He wanted to play and win one more season at USC, extend the college experience he thoroughly enjoys and delay for a year the business of what to him still is a game.

"I play for passion, for the love of this game," Leinart said after he announced that he would return to the Trojans for his senior season rather than enter the National Football League’s April draft.

Leinart’s decision delighted hundreds of fans who descended upon USC’s Heritage Hall to learn if the quarterback who has led the Trojans to two consecutive national championships would return for a chance at a third.

He had said throughout USC’s undefeated season that he planned to remain at USC, but that had been Leinart’s defense mechanism to shield him from the constant questions he would have faced had he sounded undecided. Leinart experienced that barrage practically from the moment USC finished off Oklahoma in the Orange Bowl on Jan.4, but he did not make a decision until one morning late last week in bed.

In between, he and his family consulted with his coaches who wanted him to stay, NFL executives who were anything but unanimous in either direction and agents who urged him to leave.

"But all it was was information," Leinart said. "None of it really mattered."

Apparently that was true even with the financial impact his decision would have.

If he entered the draft, he almost certainly would be selected among the first 10 picks, and some analysts said he would be the top overall choice. His bonus simply for signing a contract would exceed $10 million, and his total contract could be valued at more than $40 million.

And if he returned to USC, he could suffer an injury and receive nothing beyond what an insurance policy would pay, and then only if it was determined that he had suffered a career-ending injury.

So it was obvious that he would leave except, of course, to Leinart.

"If you really know Matt, it doesn’t surprise you at all," Leinart’s father, Bob, said. "It all came down to his heart and where he wanted to be."

Leinart said his family supported his decision, but his mother, Linda, had urged him to leave USC out of concern for his safety. But she wasn’t worried about him on the football field. She feared for what would happen if he had to endure another season of constant demands and attention from people who want a piece of him without caring for his well-being.

"That’s the problem, and it will get worse," Bob Leinart said by cell phone after he escaped a scene that was testament to his wife’s fears. Autograph hounds waited to pounce on his son and fans pounded on the window to the room where he made his announcement. "He’ll be fine on the field."

And if he is, then it’s likely that Leinart will reap his financial rewards in a year. He even could improve his position and walk away with a signing bonus near $20 million.

More important to Leinart, he will continue what has been the time of his life and delay the moment when his game will become his business.